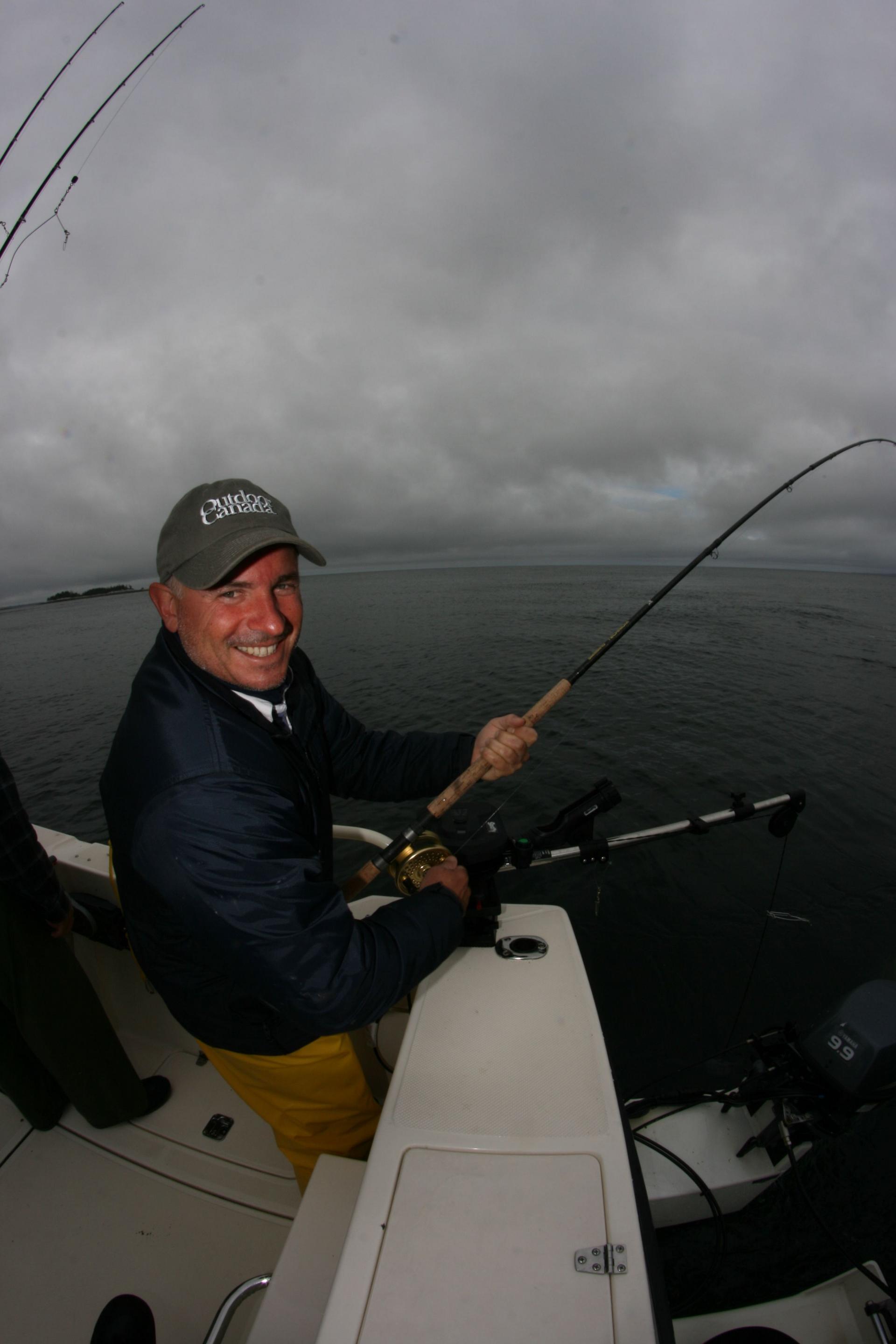 Day 3 On the Water at the Great Pacific Salmon Lodge

We awoke to rain at 5 a.m. today, the first of the trip, which was surprising—the forecast had called for rain for all three days we would be on the water here on the northern B.C. coast. Anyway, that’s why god made rainsuits, and off we went. The mission, as with the first two days, was simple: catch a tyee, a 30-pound-plus chinook salmon.

The first two days we filled the fish box, but today Billy Shields and I had to fish with, well, more discretion. The reason? We each had just one fish left to fill our possession quota. And that one fish had to be a tyee. And so we caught, and we released.

Several times we tried to give the fish—once we determined they weren’t in contention for tyee status—enough slack to slip the hooks long before they’d reached the boat. Which brings me to this question: Why is it near impossible to lose a fish when you want to, but darn easy when it’s the one?

For example, at one point I surely had my tyee; the fish pulled the line right out of the rigger release and booked it for bottom, peeling off piles of line in the process. Then it ran a second time, I gained back my line again and…gone. Billy, on the other, lost two sure giants, both on broken leaders.

So, by now, you’ve probably guessed it: the tyee quest failed. Not that we didn’t have a great day on the water. In all, Billy and I caught and released 15 coho, five chinook, three pinks (that’s one in the photo above) and a rockfish. (I kept my last salmon, a nine-pound coho, when it was time to pack it in and head back to the lodge.) We lost a bunch of fish, too. That’s how it goes.

I just checked the trophy board back here at the lodge, and none of the other anglers, including that son-of-a-gun Brad Fenson with the lucky wand, caught a tyee today. Speaking of Brad, he did nail a 40-pound halibut, the second biggest hali of the group over the three days of fishing. He also caught the biggest halibut, which tipped the scales at 48 pounds. And if that weren’t enough, the greedy soul also caught the biggest coho (13.5 pounds) and the biggest chinook (34 pounds). I’m not sure if I like him anymore.

Enough about Fenson. Tomorrow, we all part company, with the rest of the gang heading back to their homes in Alberta, while Billy and I stay back for an up-close look at Port Rupert’s fishing culture courtesy of the local tourism authority (more on that tomorrow night).

Many thanks, of course, go to Jamie Hunt, the proud owner of Great Pacific Salmon Lodge, for indulging us boisterous outdoor media types over the past four days. He’s in his first year of operation here, having refurbished the lodge and revamped the entire sportfishing operation, and he’s done a fantastic job (more on his efforts in an upcoming issue of Outdoor Canada magazine). What a great host. Thanks, too, go to Jen Humphrey for cooking us up some mighty fine cuisine and mixing no end of cocktails (cheers, Jen!). And finally, a big shout out to our guide, Ryan Dudoward, for putting us on the fish. Good man, Ryan!