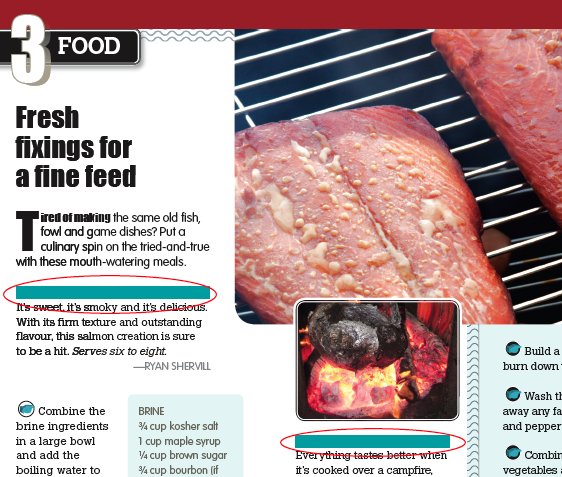 Drinking, Hunting and Missing Text: We Regret the Error

I was torn. Last week when the Summer issue of Outdoor Canada came off the press, we promptly noticed a big blunder had inadvertently gone to print. Should I point it out to our readers, I wondered at the time, or simply hope it goes unnoticed? Well, that question was answered for me on Monday when I received a letter from one H. A. Currie.

“I’m an 80-year-old sport hunter and fisherman,” wrote Mr. Currie. “My Dad always impressed on us that guns and booze don’t mix. I have done the same with my children and grandchildren. However, you think that showing a man with a gun on his lap drinking beer is okay. I am very disappointed.”

And to what was the letter writer referring? The very thing in our latest issue that I was hoping would go unnoticed. Well, clearly it hasn’t, so it’s time to fess up and clear the air.

As the result of an extremely unfortunate pre-press error, a few lines of text on page 40 of the magazine did not print (see illustrations, below). That’s bad enough. What’s worse, some of the text belonged to an illustration about drinking while hunting. Without the text, the message is ambiguous at best.

As I replied to Mr. Currie, the letter writer, “The intent of the illustration was to show that drinking [alcohol] on the stand is definitely NOT okay. Trust me, we would never advocate such a thing. I hope this clears up this misunderstanding.”

This is the kind of thing magazine editors dread, and I can only think of one other time since I joined Outdoor Canada in 2000 that we’ve had a major typographic misstep (in that case, the last line of a sidebar story had mysteriously disappeared). As they say, these things happen, but it’s just too bad it had to have happened in this particular illustration—and on page 40 of our 40th anniversary issue at that.

We regret the error. Big time. 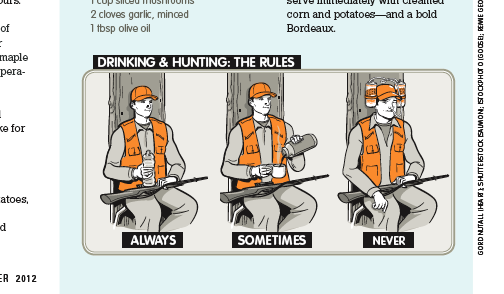 Astute readers will also notice that the names of two recipes appearing on page 40 also fell victim to our production gremlins and inadvertently disappeared.