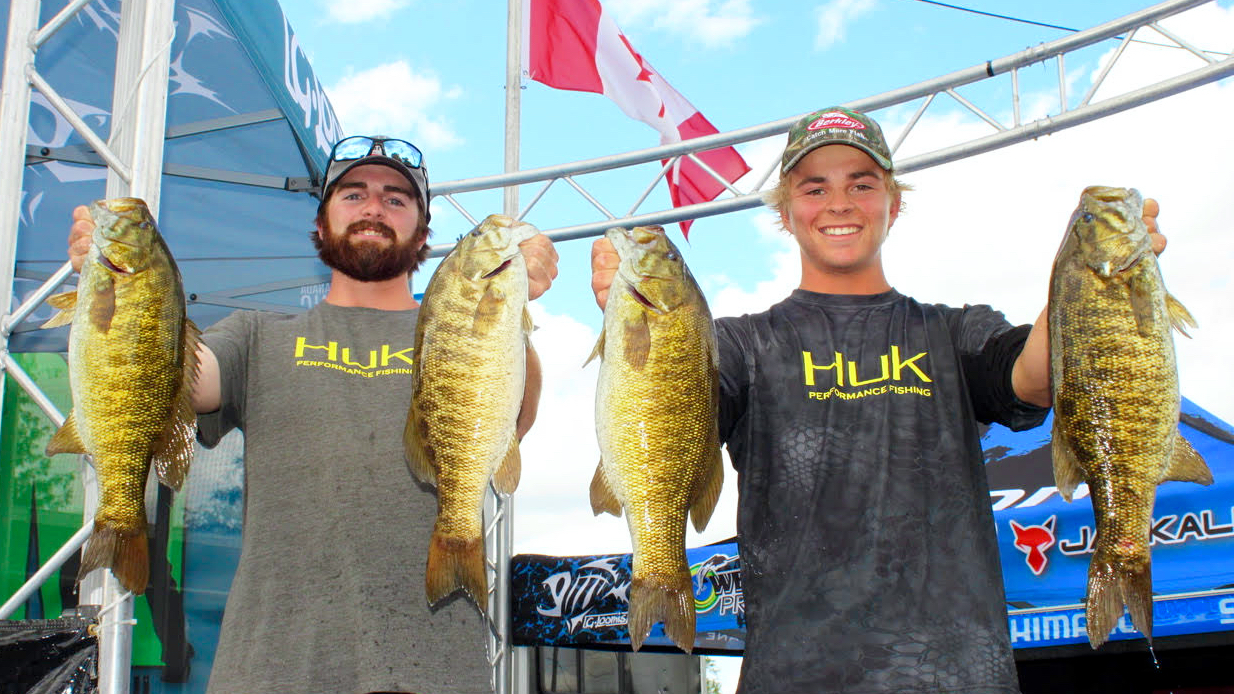 The duo begin by seeking out deep spots close to spawning bays, with nearby underwater points or structure. Since the fish are just coming off their beds, they say, you want to look for spots where they might stage. Whether it’s a deadhead in the water, a rock pile or weedbed, find a spot where they’re going to stop before they head to deep water, Gallant adds.

Seeing bait and sunfish is important. “We’ll look for old beds, fry swimming around, even sunfish beds,” Gallant says. “Largemouth relate to bait after the spawn ends. They might sulk for a day, but then they’re going right into feeding.” Sunfish typically spawn a short time after largemouth, he notes, so targeting their beds can be productive because largemouth will be nearby.

Early on, the pair primarily target matted vegetation that has grown or blown into key areas. While many anglers avoid the hassle of dissecting such heavy cover, this team has won tournaments doing just that. “Sometimes, we’ll find dead weeds everywhere, then stumble onto fresh weeds coming up from this year. That kind of spot is key,” Gallant says, noting he prefers the thickest, nastiest matted vegetation they can find.

“A bass is always going to try to find a roof over its head,” McGarry observes. “Using a 1.5-ounce weight, I’ll penetrate the thickest stuff we can find. It’s made a big difference.” To do this, the two predominantly pitch, flip and punch down a variety of Texas-rigged soft-plastic baits—their mainstay colours are black, brown and green pumpkin. When targeting mats sitting over deeper water, they keep their presentations short. If they’re only in one to two feet of water, however, they make longer pitches so the fish won’t see them, Gallant explains.

When fishing a weedline or mat edge for bucketmouths lying in ambush, they say to throw different baits if you’re fishing with a partner. In their case, one fishes the edge with a soft-plastic stickbait or a light jig while the other punches the mat with a soft-plastic crawfish or 10-inch worm rigged with a heavy tungsten weight. If a strong wind destroys the mats, they instead seek out nearby structure such as submerged weedlines, rock piles and stumps.

When fishing heavier weights for largemouth bass, McGarry stresses you need to use the right hookset. “You have to sweep-set,” he says. “If you cream it on the hookset, you’ll knock its mouth wide open.” The duo also snell their straight-shanked hooks to help roof-hook largemouths and keep them buttoned.

Find the Spot on the Spot

The pair say they prefer shorelines that appear featureless on a map but actually offer something unique to focus on. “When you look at a graph, there’ll be 10 contour lines that are just gradual,” Gallant says. “We’ll look for that little something different.” Such as? If the area has a rock, stump or isolated weed patch, they say, it’ll hold fish, as it’s the only cover.