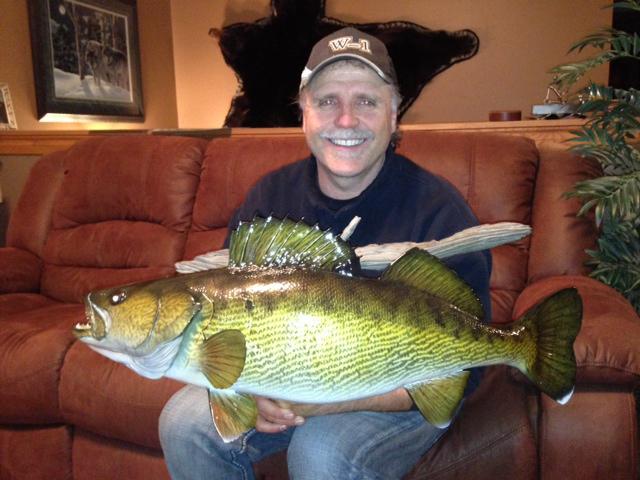 It is a picture of Dave holding a replica mount of the massive 35-inch, 15-pound plus walleye that he caught and released last August when he and his friend Dave Addie fished with me.
BlogsOn the Water Online

Fishing for Walleye in Cold Water

Walleye season was underway across Northern Ontario this past weekend and, as predicted, the bite was “different,” given the fact that the ice had only vacated lakes in the area a day or two prior. In some regions, anglers even reported lakes still covered with ice.

To make matters worse, the Northwestern half of the province was pummelled with a cold, hard, driving rain and gale force winds making for brutal conditions.

Normally, the walleyes have spawned by now, and anglers typically find the fish recuperating along warm, shallow, shorelines and in tepid backwater bays, but it wasn’t the case this weekend.

I headed out on Saturday with my 10-year-old grandson, Liam, and every walleye we caught was still swollen with eggs. Some of the fish were so ripe, they were dripping and spewing eggs all over the carpet of the boat before we could quickly unhook and release them. When it became apparent that we were not likely going to catch any “spent” or spawned out fish, we simply pulled away from the school and left them in peace. Is that crazy for mid-May, or what?

But, it did serve to confirm an important springtime fishing principle when the water is cold: It rarely pays to be out on the water before “the crack of noon!”

Buddy Bob Izumi coined that humourous phrase many years ago to highlight the fact that in the early spring (and again in the late fall) you can usually turn off the alarm clock, sleep in until a civilized hour and enjoy a relaxed breakfast before hitting the water.

Indeed, while it is often true that the early bird gets the worm in the summer, it is not the case when the water is cold and the fish are lethargic. Then, it usually pays to wait until the sun comes up and warms up the water—and the fish.

Being cold-blooded creatures, the internal body temperature of a fish is essentially the same temperature as the water in which it swims. So, the walleye on the weekend—that generally prefer and seek out water temperatures ranging between 62 F (16 C) and 67 F (19 C)—were shivering in the frigi, early morning conditions.

It wasn’t much warmer when Liam and I headed out after lunch, either, but the crowds had thinned out and the fish activity was peaking.

It will be even more the case in the upcoming days, when weather conditions hopefully return to normal. Then, fishing in the latter half of the day will generally produce more and bigger fish than the first half. This is why you always want to be a “nighthawk” when the water is cold rather than an “early bird”.

And while we’re on the subject of more and bigger walleyes, take a look at this image buddy Dave MacKenzie from Lloydminster, Saskatchewan sent me the other day.

I had presented a fishing seminar in Lloydminster much earlier in the year and the organizers had asked me to include a two-day guided fishing trip as part of the package. They subsequently auctioned off the trip, which the two Daves purchased, with the proceeds going to the Saskatchewan Fish and Wildlife Association.

To say we had a blast fishing for walleyes and bass in August is an understatement, but Dave put the icing on the cake when he hooked this massive walleye and then let it go. I am betting it was one of the biggest walleyes caught in North America last year.

Being Dave’s “personal best” ever walleye, we took photos of the fish, as well as it length and girth and then Dave had the good folks at Advance Taxidermy in Toronto prepare the replica mount for him.

Given the size of his smile, I’d say he was happy with the results.