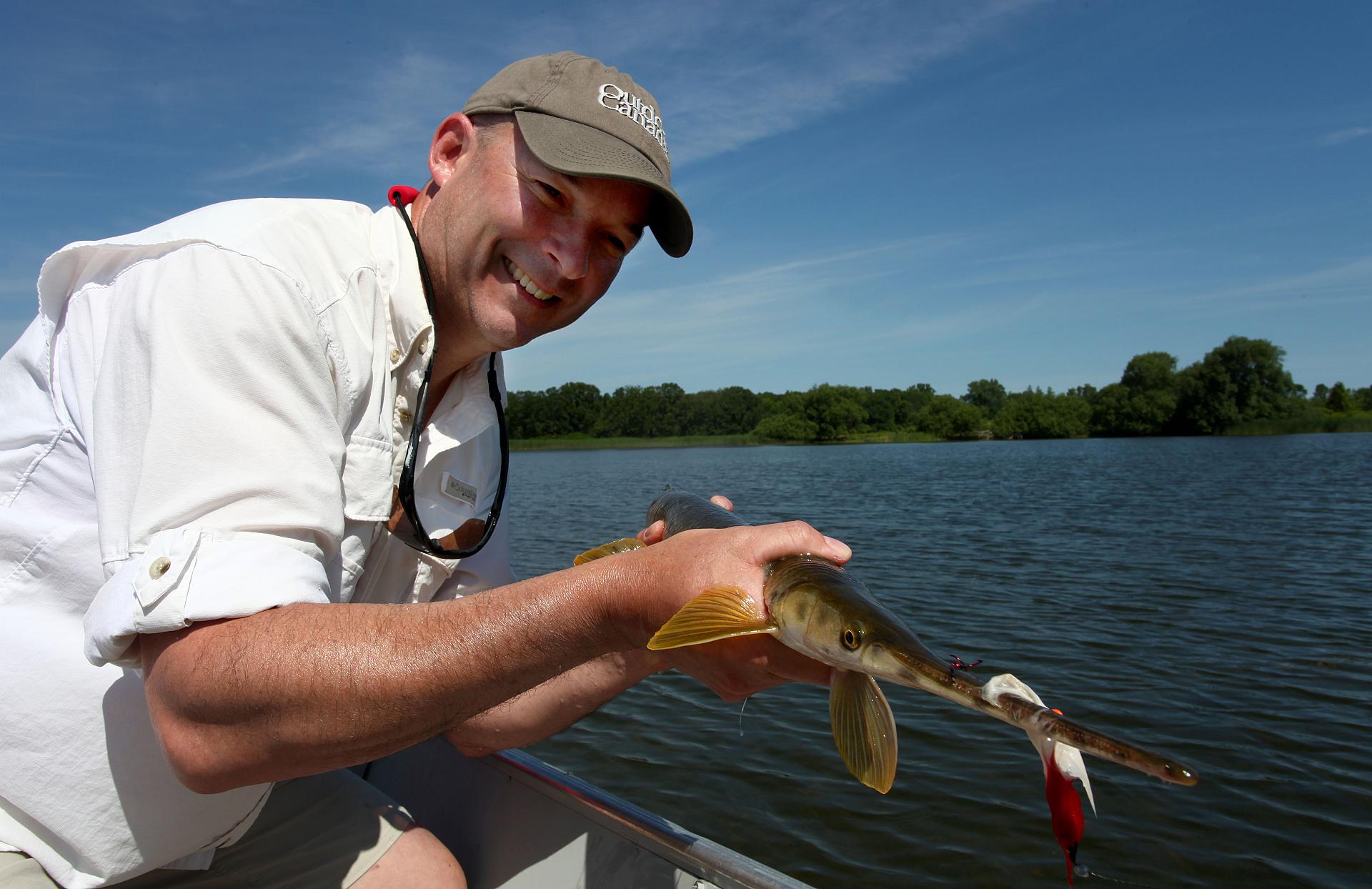 A few things about longnose gar: they’re incredibly slimy, horribly smelly, extremely ugly and downright treacherous if you get on the wrong side of their razor-toothed snout. Nevertheless, I’ve wanted to catch one ever since I was a kid, when I first saw them swimming in the warm shallows of Georgian Bay. They were so unlike anything else, I just wanted to see one up close. Well, yesterday I finally had my chance thanks to buddies Nick Pujic (of Fly Max Films) and fellow Aurora, Ontario, angler Rob O’Reilly.

These two fly-fishing experts have been targeting gar for years now, and as a result, they have them dialed right in. How dialed in? They catch them on the fly, sight-fishing shallow rock-bottomed bays. Yes, that’s right, on the fly. Now, to me, catching anything on the fly is pretty cool, so it was exciting to learn my first gar would be teased by feather and thread. And sight-fishing at that.

Nick has Quinte totally charted out as to where to find the fish, having patrolled the giant Lake Ontario bay’s waters since he was a kid. Not many people chase gar, but like me, Nick (and Rob) have long been fascinated by these prehistoric-looking apex predators. They’ve even created their own sure-fire flies, including the one I used: a big, fluffy red-and-white beast with a single hook up front, tipped with a treble stinger.

On the drive to meet Nick on the Bay of Quinte, Rob gave me a thorough rundown on what to expect, right down to describing the gar’s surprisingly subtle, head-turning take. The key here is being able to watch the fish make its move, because the hit is almost imperceptible. And when the gar does make the small swish on your fly, you have to hammer the hookset to get a piece of the prehistoric beast’s long beak.

Rob must be a good teacher, because on my first cast to the first fish I saw, I nailed it; the fish behaved exactly as Rob had described. To spot, cast to, strip past, hookset and land my first gar was amazing. Even better was to finally hold such a fish in my hands (see photo). Its scales were more like armoured plates, its body pure muscle, and that snout! Any baitfish finding its way into the tight rows of interlocking razor-sharp teeth is toast. Which brings me to perhaps the most important tip I learned about fishing for gar: never position your hands beside the snout, just in case the fish thrashes to the side. I didn’t need to be told that twice.

In the end, the three of us (two guys fishing at a time, with Nick and Rob trading piloting duties of Rob’s sweet Lund Alaskan) caught some 30 fishing (most over 30 inches), including two double-headers. We could have caught piles more, but we started getting picky, aiming for specimens in the 40-inch-plus range. Nick brought one in, but I missed the strikes on my only two opportunities. As Nick said, now you have to come back and try again. And so I will. Thanks guys!