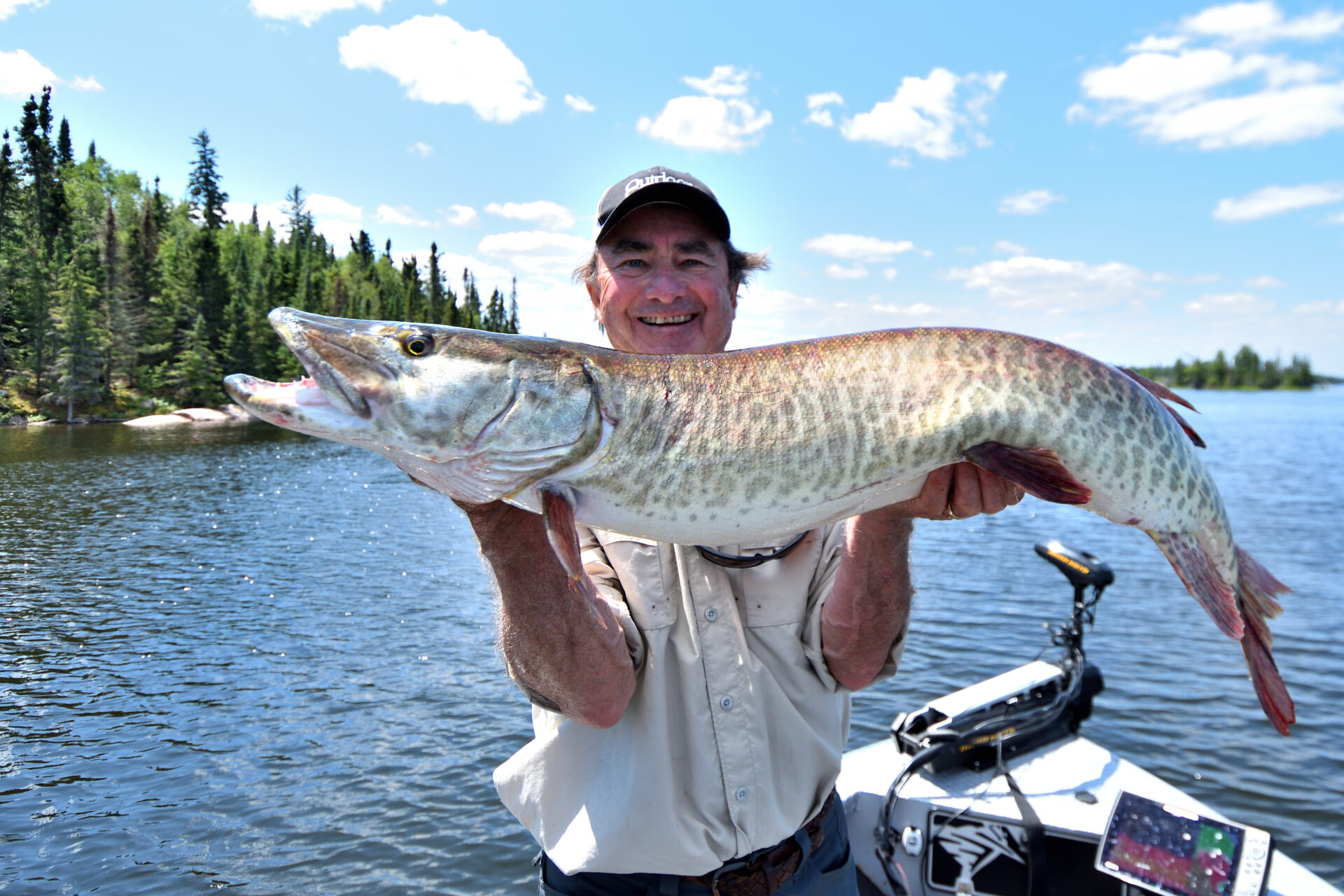 Gunning for muskies: The one rod, reel, line and leader combination you must have

I’ve used the analogy several times in the past, but it is so fitting and having just returned from gorgeous Eagle Lake Island Lodge in Northwestern Ontario’s Sunset Country, I am forced to employ it again. When you’re fishing for muskies, please don’t take a knife to a gun fight.

I honestly felt sad for several of the folks that Liam and I made friends with during our stay at the lodge, because they arrived so enthusiastically, hoping to catch their first ever or biggest muskie. But they had at least one—and usually both hands—tied behind their backs. Truth of the matter is, they stood very little chance of accomplishing their dreams because of the equipment they were using.

Now, I am not going to suggest you have to buy this or that particular brand of rod, reel or line. But I will tell you this: If you are going to the muskie dance, put away the spinning gear and bring at least one proper baitcasting outfit. I don’t care if you have to beg, borrow, or steal it from a friend, get an eight- to nine-foot heavy-action muskie rod, and you will be able to handle almost any bait or lure in musky fishing.

I favour slightly longer nine-foot muskie rods, but if you prefer shorter sticks in the eight-foot or  8’6″ range, then go for it. They will perform admirably for you. But you need a heavy-action rod in this range so you can cast big baits long distances, and do it all day long without getting fatigued.

So many folks think the heavy action is required because muskies grow big, or fight fiercely, but that’s  not the reason at all. Rather, it is because you’re balancing your rod with the size and weight of your lures. It’s the same reason bass anglers flipping and pitching for largemouth use a long, heavy-action flippin’ stick spooled with 40-, 50- even 60-pound-test line. It’s not because three, four and five pound bass fight particularly hard, but rather because they’re pitching heavy ounce-and-a-half jigs into aquatic jungles from which they need to extract the fish quickly.

Even more important these days, however, you need that long heavy action rod so you can properly execute big, wide, figure-eights and ovals. Time for a little more tough love: I don’t care where you’re fishing, every trophy-size muskie has likely been caught and released at least once—and probably two or three times—in its lifetime. So your figure eight better be impeccable. And when you stick the fish in the sweep, you need a rod that is stiff enough for a hook set of epic proportions. Musky hooks are big and thick, and the fish have vice-like jaws that latch onto your lure.  You simply have zero chance—nada—of achieving a good hook set with standard spinning gear. 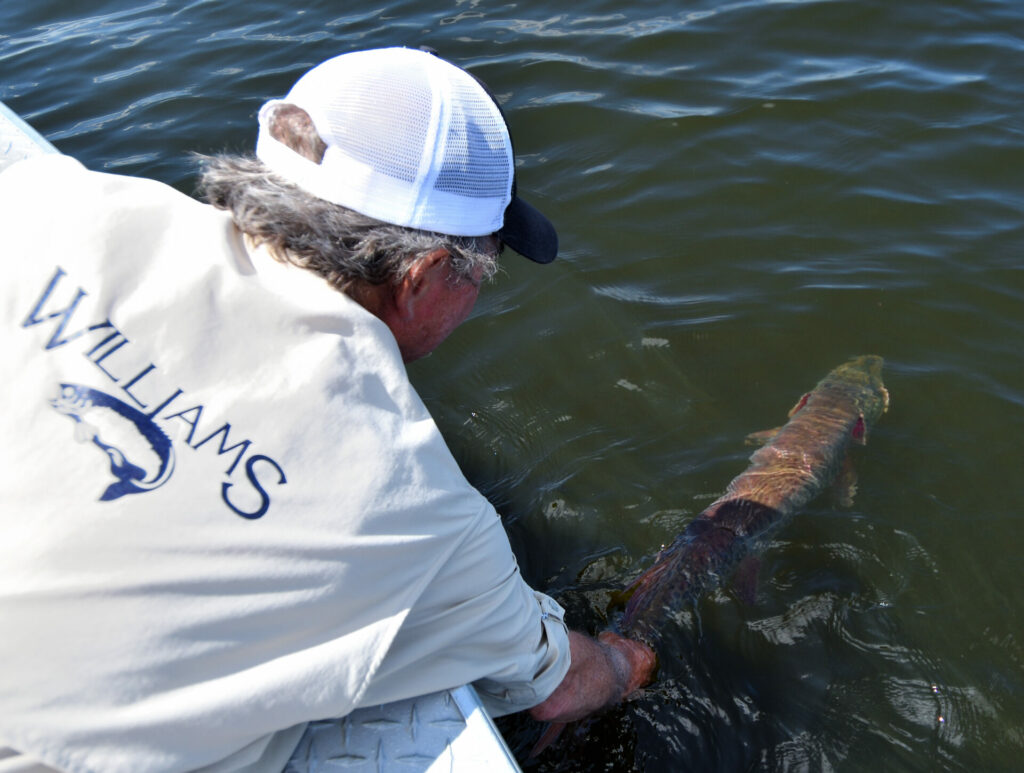 Now, pair that heavy-action rod with a 6.3:1 ratio baitcasting reel. Again, I couldn’t care less about the specific brand you use, just get one from a reputable company. I prefer 300-size reels because my mitt is relatively small, and bigger reels numb my fingers and hand when I use them for six, eight or 10 hours straight. I also find that 300 models holds plenty of 80-pound-test braid. But if you think a bigger 400 series baitcaster is better, don’t let me stop you from using it.

I should mention, too, that the moderate 6.3:1 ratio is perfect, as it is fast enough to pick up line when you’re using dive-and-rise and glide baits, but slow enough that you can winch in the big, water resistant double-10 blades that are so effective at calling in muskies these days.

Your line choice is an even easier decision. Eighty-pound braid is standard these days, and perfect for nearly every muskie application. It is also thick enough that it won’t dig deeply into the spool if you backlash, or as I like to call them, “make a professional over-run.”

Musky lures are heavy, so if you backlash, the momentum of the lure moving forward will often dig lighter line deeply into the spool. So you want a heavy line to withstand the shock of a mid air backlash that, let’s face it, will be common when you’re first starting out. New muskie lures are expensive —$60, $80 or even $100 a pop these days—so you don’t want them waving goodbye when you make a bad cast. Last but not least, with 80-pound-test you can drive the hook home hard without snapping the line. Especially when you team it with a heavy-action rod that doesn’t have a lot of give.

I’m not going to say much about leaders, because I have already covered them in an earlier blog that you can find HERE.  A short 10- to 12-inch (100- to 125-pound test) fluorocarbon leader is the gold standard these days for a simple reason: It works for nearly every application. Will you eventually want other leaders for technique specific applications? Of course, but we’re talking today about the one rod, reel, line combination to get you started, and with this leader you will land every fish you hook.

Now, throw away that damned knife and get yourself a gun!