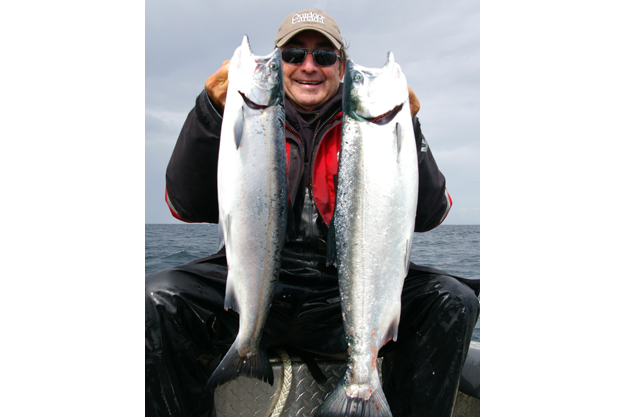 How to rig an anchovy for salmon and trout

One of the things I enjoy so much about visiting and fishing a new area is learning the local tricks-of-the-trade. I can’t tell you how many times I’ve been able to bring home one of these sleights-of-hand and duplicate the results on my local waters.

Better still, many times I’ve been able to use the tactics and techniques for a different species of fish, showing them something they’ve never before seen, with amazing results.

Such was the case a week ago when buddy Mark Stiffel and I were fishing for Coho and Chinook salmon at Queen Charlotte Lodge in Haida Gwaii.

Down on the dock one morning, I was actually surprised to see several of the local guides rigging up anchovies for bait. Usually herring are the preferred salmon offering on the west coast, but when I was chatting with guide Cody Johnstone, he informed me that when he has been cleaning the salmon at the end of the day and preparing the fish for his guests, he’s noticed that many of the fish are crammed with needlefish.

Needlefish are obviously native to Haida Gwaii, but they’re much smaller, thinner and more streamlined than herring, which are typically at least twice as big.

But needlefish are rarely caught or sold as bait, so the boys have had to find something that matches the size, shape, colour and profile of needlefish, which as it turns out are anchovies.

If you watch this short video clip carefully you see how simple and effective it is to rig an anchovy for salmon – and I am betting lake trout here on my home waters in Northwestern Ontario.

One quick comment, though, as you watch the video. You’ll see that Cody pushes the tail of the anchovy straight up when he first rigs the baitfish, while in the close-up, he pushes it off to one side.

Both methods are totally acceptable, with some guides preferring the “tail up” method and others preferring the “tail-to-the-side” approach. When I used the anchovy rig last week, I alternated between both tactics, preferring to let the salmon decide, and it was difficult to determine which one produced better. It seems salmon simply like to snack on anchovies.