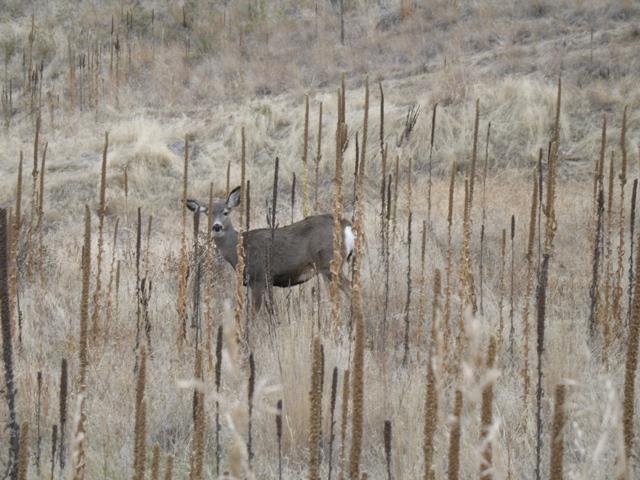 Between the rugged Okanagan Highlands on the west and the snow-capped Monashees to the east, the Boundary Forest District is a patchwork of forests and clearcuts. It is rumpled like an unmade bed and stitched with roads that cut one into the other, headers joining headers and eventually turning into mains that follow ravines down out of the pine crested high country into the irrigated lowlands.

This is deer country where mule deer thrive in the lush second growth, often alongside pockets of whitetails. Travel the lumber roads in the cool of morning or in that magic hour at day’s end and you’ll see them picking their way along the edges of the clearcuts or bouncing across the road ahead of the vehicle. Or, if you just want to see deer, spend some time in the farmlands along the Crowsnest Highway where they gather by the dozens to graze in the fields, often coming right into the towns to help themselves to garden greens and manicured shrubs. Most are mule deer does with their fawns and the odd yearling buck still tagging along by force of habit, but here and there along the river bottoms are bands of whitetails as well.

That same mix of mulies and whitetails prevails in the back country away from the paved roads, the towns and the farmlands. In some places Crown land starts barely 10 kilometres in, other places you might have to travel twice that to reach huntable area. Boundary Creek Road which starts at the Crowsnest just east of Greenwood is one of the primary access points, providing access to a vast network of forestry roads from Wallace Creek all the way north to the Terraced Peak and Gable Mountain areas. The Christian Valley Road which follows the Kettle River Valley north from Westbridge also provides access to this high country by way of Lost Horse and Thone Creeks. Christian Valley tends to have more hunting pressure during October when any mule deer carrying antler and any whitetail—antlered or antlerless (check the regulations  to verify since this is subject to change)—is fair game. In September as well as November, mule deer must carry four points on at least one side, not counting brow tines, and only whitetail bucks are legal.

Cutting your tags on either one or both species is not overly difficult in Boundary Creek country, but cutting your tags on a respectable buck requires passing up lesser rack and a willingness to push yourself. Mulie bucks hold to the spruce and fir forests of the high country—the higher the better—for as long as they can, making their way down when the snow starts to accumulate at the end of October and the rut intensifies. Whitetail bucks are more likely to be found along the crest of lower ridges and along the edges of the clearcuts and they too start to seek out does around this time. The mule deer season has historically closed ten days into November, but those ten days are prime for heavy antlered bucks during their fall migration and the rut. Whitetail bucks are legal to the end of November and glassing the edges of lumbered areas is a highly productive tactic.

And if you’re in the area, bring a shotgun for grouse. Though the birds are far from plentiful this fall, we still managed to pick up a mixed bag of ruffed, Franklin’s (similar to a spruce) and blues. The latter, now properly called dusky grouse to distinguish them from the coastal sooty grouse, are amazing game birds. Weighing about the same as a brace of ruffed grouse, they gravitate to the Douglas fir forests on the crests of high ridges and around the talus slopes of the subalpine, sometimes in flocks of a dozen birds or more. The meat is light coloured almost like that of a ruffie and mildly flavoured. But more on these birds in another blog.

Setting Up The Hunt

I usually stay at the Greenwood Motel (1-866-955-6363) which provides large, clean rooms at competitive rates and kitchenettes for a modest premium. This time around, I also stayed in Rock Creek at the Gold Dust Motel ((250 446-2222) which has about half a dozen units; large rooms, reasonable prices, no kitchenettes and some highway rumble. I’m told the Mile 0 in Midway next to the gas station is another reasonable option. For something more rustic, Jewel Lake Resort off Boundary Creek Road (14 kilometres from Greenwood) offers basic hunter cabins, but these are usually in high demand with reservations made far in advance.

If you need to get your deer in out of the elements, Bruce Allison (250 445-6331) in Greenwood has a walk-in cooler for just that purpose.  He’s extremely helpful and accommodating and the rate per animal is surprisingly reasonable.

One of the best tools for finding your way around the forestry roads that reach deep into this area is the Boundary Forest District Recreation Map, published under the now-defunct Forest Recreation Map Program. Though outdated to some degree, it nevertheless provides a basic guide to the network of forestry roads throughout the Boundary region.  In conjunction with a GPS unit, I rely on it to find my way into areas I want to hunt. Another option is to pick up a Thompson-Okanagan Backroads Mapbook available at gas stations and convenience stores throughout the region. They’re up-to-date and complete, though I sometimes find them detailed to a fault, making them difficult to decipher at a glance.  Either way, I like to familiarize myself with the area by poring over Google Earth’s satellite images of my favourite haunts in bird’s eye-view.

Rock Creek Trading Post, on the west side of Highway 3 and a stone’s throw beyond the Gold Pan Café/gas station/motel, offers outstanding coffee brewed from beans roasted on-site. Opens after nine in the morning and closed early week.

The Copper Eagle over in Greenwood (34 kilometres farther east on Highway 3), on the other hand, opens its doors daily at six in the morning, serving up freshly brewed coffee, home baked bread and, for lunch, a wonderful soup-and-sandwich combo.

Best prices on gasoline are in Midway (Boundary Fuels, 19 kilometres east of Rock Creek) and in Greenwood (Race Trac, just at the entrance to town from the west).

McMynn’s supermarket (just about behind Boundary Fuels in Midway) offers a surprisingly good selection on groceries, including fresh produce.