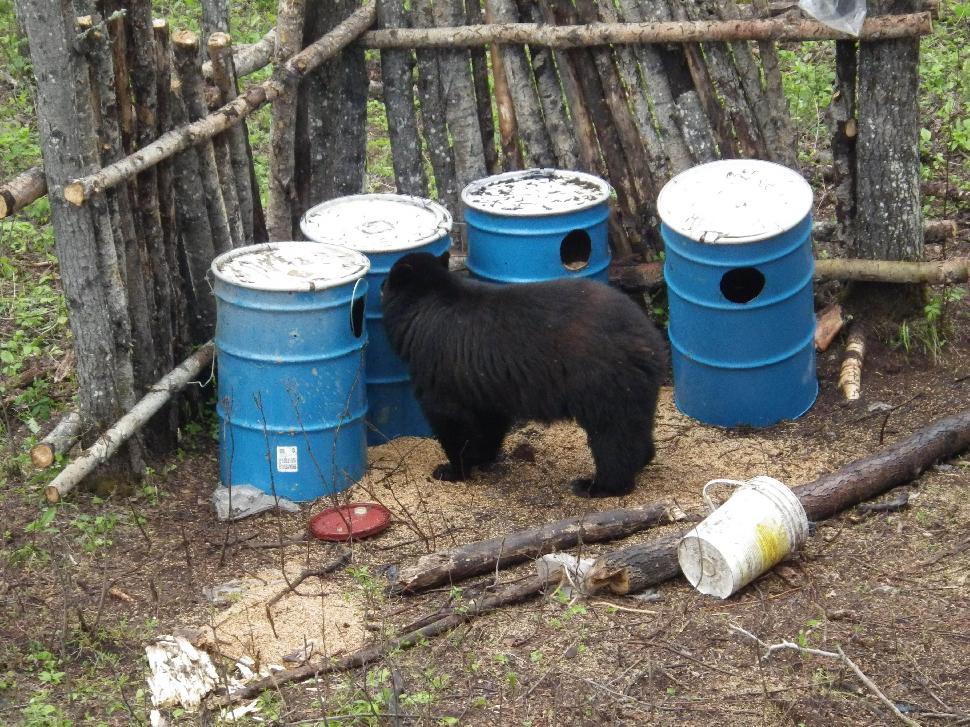 Few activities are as rewarding as observing wild bruins up close in their natural surroundings deep in the woods. Furthermore, harvesting an animal with primitive hunting equipment, like a bow and arrow up close is nothing short of exhilarating.  Successful boar bowhunting is about two things: preparation and patience.  Many areas in Canada allow baiting for black bears during spring when they are really hungry after hibernation.  Baiting has the reputation of being unfair by some, but it is far from easy and does not guarantee success.  Bears, especially big boars, are smart, sneaky and elusive.  Baiting black bears requires a good location with resident bears, a quality bait station to lure bears in for a shot, a shooter setup that allows clean ethical shots and finally, a recipe that attracts and holds bears. Follow through on those four elements, and you will have a bear rug in no time.

Barrels should be prepared in advance in your workshop so they are ready when you head afield.

Location is by far the most critical element. There is no point in investing time, work and money into area without healthy bear populations. The goal of baiting is to attract bears from resident stable grounds, by using strong, appealing smells and copious calories. This turns them into predictable returning eaters.

Start broad by reviewing bear harvest reports and record books for areas consistently producing year after year, and then ensure the Wildlife Management Units (WMU) in those location allow baiting.

Once you’ve selected a WMU to hunt, your focus will now turn to finding promising bear habitat by reviewing topographical maps and satellite imagery available for free from Google Earth (earth.google.com). Seek out low, cool grounds along river systems or marshes bordering abundant food sources such as planted cereal crops like oats or natural forage patches of berries or clover in new forestry cuts.

Before heading afield, talk to wildlife biologists, trappers, officers, industry workers, outfitters and bush pilots familiar with the area you’re pursuing–it just saves you time. These people will know the area best and are often willing to share key intelligence with outdoorsmen who are respectful and courteous.  Often these discussions will point you to other places you may have overlooked or not discovered.

Once afield, look for trails alongside river systems or in low marshy areas.  Assuming abundant food is nearby, look for indicators like claw marks on trees and scat. Beavers are a favorite food of bears, so targeting areas with beaver activity can produces excellent results for two reasons: one, the presence of beavers and two, because those areas tend to green up first in the spring providing plant material to consume.

A crib forces bears to enter the bait site broadside, providing the bowhunter with an excellent shooting opportunity.

The optimal setup for a bait station is a sparsely treed area, surrounded by thick dense cover and close to a natural travel corridor. Woods like this allow bears to approach the bait feeling safe. Your bait container should be a 50-gallon barrel with a removable lid that clamps on securely. Make an eight-inch diameter hole in the top quarter of the barrel’s height. In addition, make a few other smaller holes large enough to slip a cable or chain through. Use this to fasten the barrel to a tree, which this prevents the bear from rolling it out of sight of the shooter. The removable lid is key to keeping your bait protected from weather but still allowing you to re-stock your bait barrel quickly and easily. An open-ended barrel provides bears with a grab and go option leaving you without a shot, while a smaller feeder hole forces bears to spend more time at the barrel getting food out, providing you with a few extra seconds that you may need.

Bow shots require a good view of a broadside bear with his front leg forward. To accomplish this, build a crib or fence to place your bait barrel against forcing the bear to always approach from either side exposing his vitals for a clean, ethical kill shot. If you are seeking six-foot bears, cut logs exactly that length and place them for comparison where bears approach. I have witnessed bears enter a bait site from behind the barrel and reach around it for a morsel of food and turn their back to me and walk away without a shooting opportunity–it is very frustrating.

A bait station without a crib can be a very frustrating experience.  We watched this bear feed for over two hours before it sauntered away without providing us a shooting opportunity.

Being omnivores, bears will eat just about anything but some favorites are: pastries, popcorn, bread, oats and meat scraps. Again, having a lid on the barrel will protect breads, pastries and popcorn from weather damage and keep your bait attractive. In addition to providing calories, you need to have a strong odor, the more horrific the smell, the better. I have used ‘stink’, a grey soup like liquid composed of rotting fish guts.

Another favorite attractor technique is to use beaver carcasses, either hung in trees or filling a cage with some. Beavers are a favorite food for black bears so using them is a natural fit. In addition to meat, I fill one barrel with oats coated with discarded restaurant grease–very economical. The sticky coating adheres to the bear’s paws and leaves a scent trail to and from the bait as the bear roams, thus attracting more bears.  Every bear is different, so you may need to try different things until you determine which barrels empty first.

Meat scraps and oats with restaurant grease is my favourite recipe for baiting black bears.

To summarize, when bowhunting for black bears, start with a WMU known for high bear population and hone in on quality living quarters and travel corridors. Once you’ve selected an area, properly set up one or many 50-gallon barrels full of smelly, calorie-rich food to attract bears in for a quality shot. Ensure your shooting location is concealed and safe. Following these four key elements, odds are in your favour that you’ll be presented with a quality, ethical shooting opportunity.

Planning on killing a bruin with traditional bowhunting equipment?