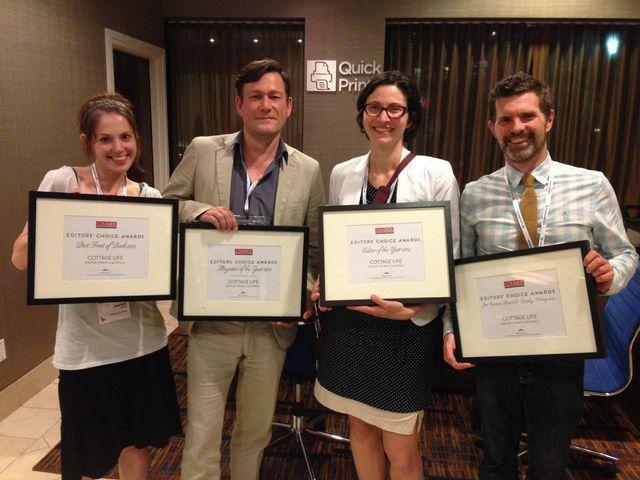 First, the bad news (for my team and me, at least): Outdoor Canada magazine failed to podium last night at the Editors’ Choice Awards, hosted by the Canadian Society of Magazine Editors at MagNet 2014. On the upside, we were at least named first runner-up for Best Magazine in the medium circulation category. And even better, the winner was our sister magazine at Cottage Life Media, Cottage Life.

The Cottage Life team also picked up honours for Best Front of Book section and the Jim Cormier Award for Display Writing. And if that weren’t enough, editor Penny Caldwell was named Editor of the Year. With that, we at Outdoor Canada will happily bask in the glow of Cottage Life’s glory, secure in the knowledge that we work with a very talented group of people indeed at Cottage Life Media (a division of Blue Ant Media).

I should note that there is still an opportunity for Outdoor Canada to pick up some bling for our hard work. This is officially Magazine Week in Toronto, complete with the annual MagNet magazine conference now in session, culminating with the National Magazine Awards gala tomorrow night at the posh Carlu. Outdoor Canada‘s contributors are up for seven awards (click here for details), and our fingers are duly crossed. Good luck, also, to Cottage Life, which has 13 nominations, include a chance for the prestigious Magazine of the Year honour.