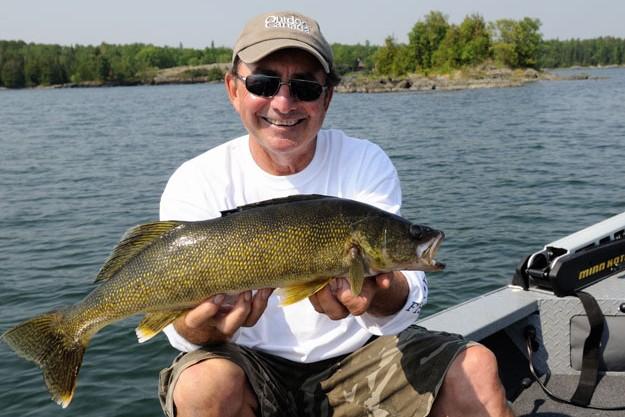 Ripppin’ and rollin’ for walleye

Slow Death is arguably the most efficient and effective trolling system for catching walleyes—and just about every other fish that swims—and quite possibly the simplest technique to learn.

As I reported in Outdoor Canada magazine several years ago, when the technique was still the hushed up secret of the tournament crowd, it was first developed in South Dakota by Missouri River fishing guide Dave Spaid.

Spaid removed the blades from a standard walleye crawler harness and began trolling with just the beads, two hooks and a crawler. Then, he modified the rig even further, discovering the critical component to be a simple #2 Tru-Turn Aberdeen hook, with its unique 45-degree kink in the shank. When he threaded on a nightcrawler, giving it the distorted shape of the shank, and pinched off the trailing end so only a small, smelly inch-long nub hung off the back he discovered the bait rotated in a corkscrew fashion, enticing more and bigger walleye than almost any other tactic he had ever tried.

As a matter of fact, Slow Death was so effective, the elite walleye pros like Gary Parsons and Canada’s own John Butts tried to keep it a secret for as long as they could.

Fortunately for the rest of us, they weren’t successful and word eventually leaked out about what they were doing. Mustad even developed a special Slow Death hook, based on the shape of Gary Parsons fingers and the way he bent his hooks to create an accentuated wobble.

Now, the folks at Matzuo have gone another step further: Calling their system the Rip ‘N Roll, they’ve developing a much sharper and meatier hook with a tiny swivel incorporated in the eye. They introduced it at the recent EFTTEX Show in Vienna, Austria where I met up with Greg Stawczyk, Matzuo’s National Sales Manager, to learn about the details, which you can do too, by watching this short video.