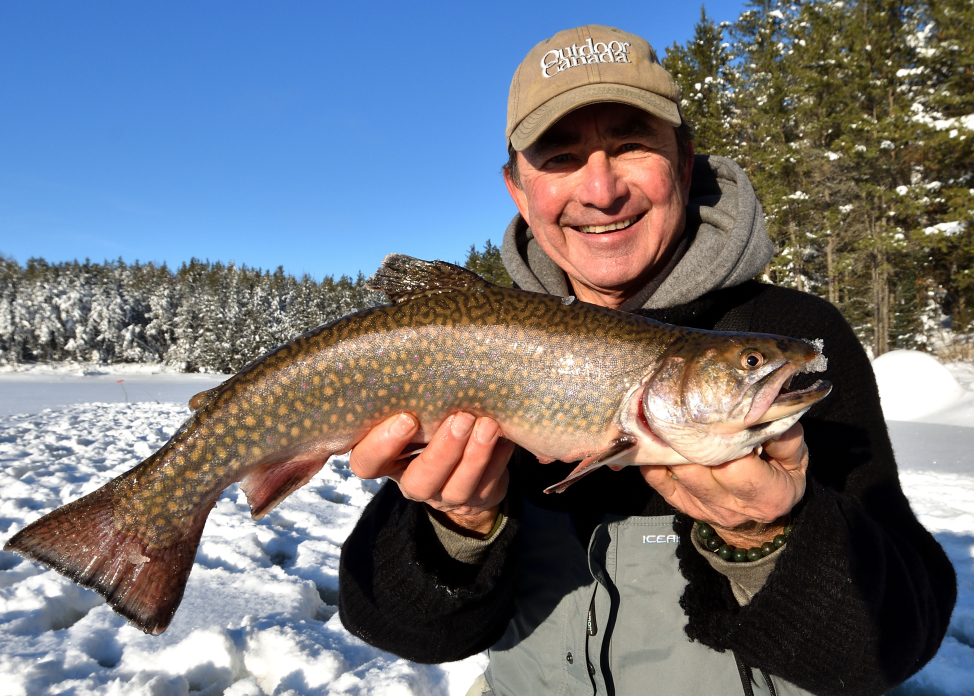 Selective feeders: Think your kids are picky? Check out these trout!

Try to find the specific food that they're keyed in on

My good friend Mark Alford is the finest winter ice angler whose name you’ve never heard. It is because in this day and age when many of us feel compelled to take an image of every meal we eat, and then post it to social media, Mark barely knows how to turn on his iPad and send an e-message. To have a Facebook, Twitter or Instagram account on the other hand, would take him away from the two things he cherishes the most: hunting and fishing.

So, call him old school if you like, but it doesn’t take away from the fact that he probably puts more fish on the ice in a single week than most social media savvy ice anglers do in an entire season. Think I am exaggerating? One day last winter, Mark and an old-time backwoods trapper he befriended (who is in his 80s and wouldn’t have a clue what Facebook is), caught and released 60 brook trout.

Sixty brookies in a single day!

Mark was up to his winter trout tricks again recently, travelling 48 kilometres alone, on his ATV through the snowy hardwoods south of Algonquin Park into a remote trout lake. He caught another crazy number of fish, and kept a couple of the small ones for dinner. But when he cleaned them and checked their stomachs to see what they had been eating, he was intrigued to find a fistful of snails.

I am sure it took him longer to turn on his iPad, peck out a message and send me the image than it did for him to catch the fish in the first place, but it raised an interesting consideration that most ice anglers rarely take into account. And that is: giving the fish what they want to eat. 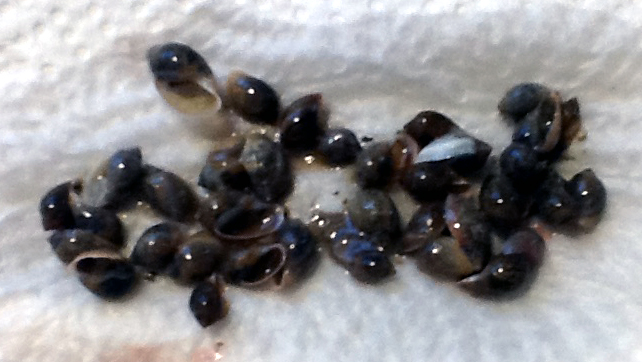 Fly fishers call it “matching the hatch” and they will sometimes take it to ridiculous limits, dabbing tiny tufts of orange and red fluff to the underside of their minuscule flies to imitate a female mayfly, landing on the water to drop her eggs. But brookies, browns and rainbows will sometimes be that selective in terms of what they will put into their mouths.

Indeed, when I saw Mark’s image of the snails, I was reminded of a conversation I once had with good friend, Dr. John Casselman, who was researching the feeding habits of lake trout on Victoria Island in the high arctic, as part of a National Science Foundation team investigating the impacts of climate change.

“The trout were eating everything up there,” Casselman told me. “Lemmings, weasels, you name it. If you were in the water, you were done. I couldn’t believe it. But here is what was so fascinating. When we would put a pile of stomach contents on our balance scale and weigh it, we’d find one trout would be full of insects. Another one would have a fist full of plankton. And they’d never be mixed. Even the plankton would be the same species. It is as though once they were on a certain plankton species, their isotopic signature suggested they always stay on the plankton.

“In other words, when they get on a certain species, they know it, they stay on it and they get hooked on it. We had some trout that got onto snails, and they would have the same species of snail in their stomach and no other insects. Another trout would be full insects and no snails. It is as though they get habituated on something and they optimize it. It isn’t a case of eating 40 plankton, 20 snails and three types of insects.”

As I’ve have said many times, find the food and you will find the fish. But it is worth noting, too, that in some lakes—probably many more than we care to imagine—you’ll catch more and bigger trout when you find the specific lure or bait that the fish want more than anything else.

That is what Mark was able to accomplish when he coaxed several of the snail eaters to whack his lure. Was it because he discovered something they enjoyed eating even more? Or was it a pure reflex response that made them so angry they struck out of annoyance?

We’ll never know for certain, but this much we can say: Find the selective offering the fish really favour and you, too, might catch 60 trout on your next outing.