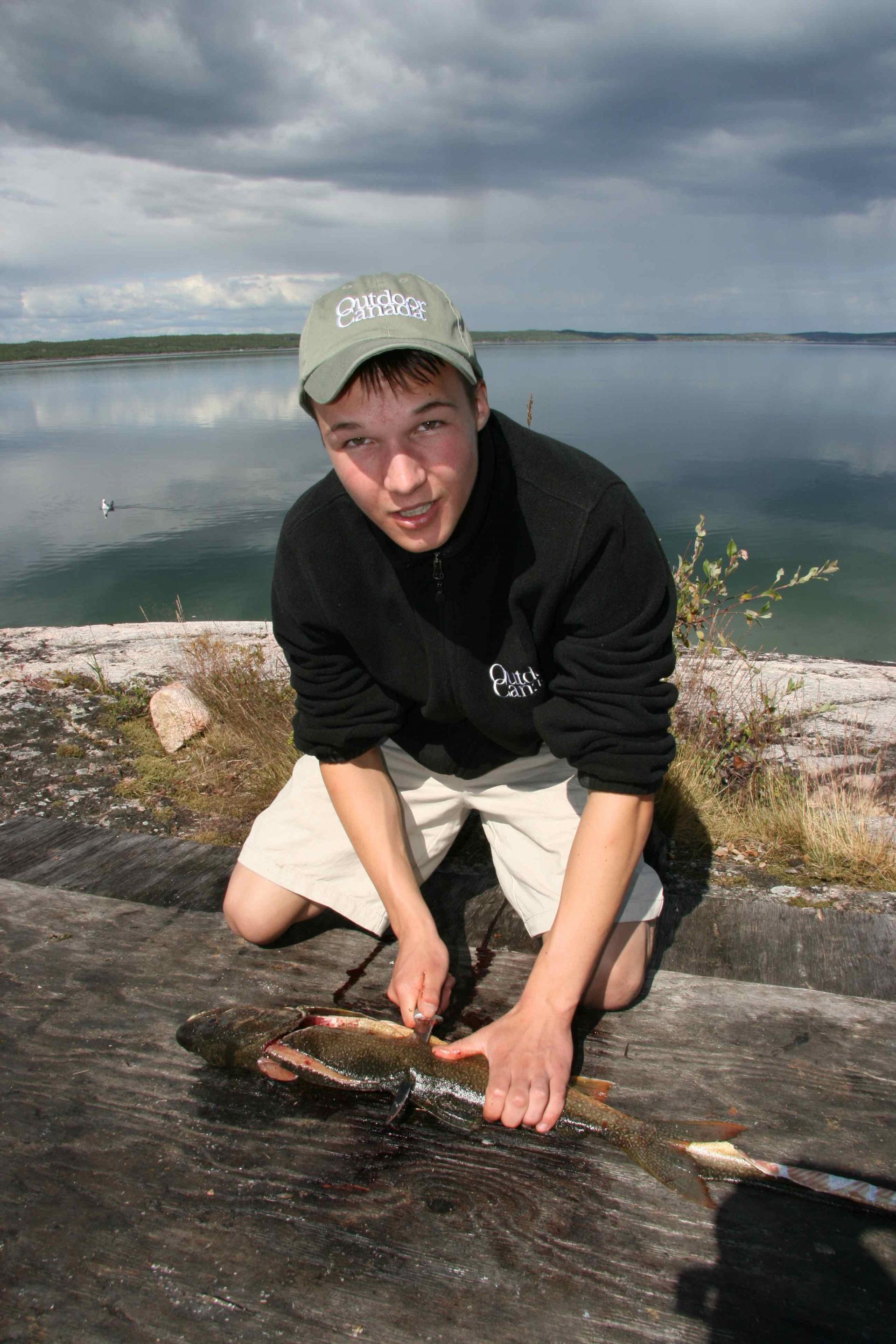 Ever since we arrived here at Yellow Dog Lodge, Riley has been scoping the Precambrian rock lakeshores for cliffs. But not just any cliffs—in particular, he’s been on the lookout for tall walls of solid rock from which he can propel himself into the frigid, north of 60 waters. Yeah, he’s 15, and he likes to cliff jump. And finally today, we found a suitable venue: a 35-foot wall above 60-plus-feet of water. Riley had planned to take a number of jumps, but after his first leap into the mind-numbingly cold water, he decided he’d accomplished his goal (click here to watch). Been there, done that. So ended our fourth day on the water at YDL.

Once again we spent the day on Duncan Lake with guide Garrett Fyfe, although this time with lake trout on the agenda. But before we got our trolling set-ups in the water, we first hit the pike grounds just out in front of the lodge. Some 50-inchers have been pulled from this particular area, so it’s always worth a look before hitting the main lake. Well, this morning we weren’t disappointed, landing several nice pike, including a 41-incher on my fly rod (that’s the fish in the photo with Riley and Garrett).

As for the lake trout, Riley once again put the first fish in the boat. And the second. And the third. In all, he caught four lakers to my one before we headed in for shorelunch—the full traditional menu of beans, corn, fried onions and potatoes, and fresh-caught trout (which Riley helped fillet). It was my son’s first northern shorelunch and he rounded it out in style, joining Garrett and me for a nap on the soft blanket of Labrador tea covering the granite shoreline.

After lunch, we tagged a few more lakers then decided to call it a day after hitting a pike bay we’d visited two days earlier. Again, it was full of giant gators, and Riley landed a couple, sealing the deal with one of my favourite hardware pike baits: a #5 Mepps Aglia Glow. And this time, the northerns were definitely interested in a black-and-red Clouser Minnow I showed them. Alas, I lost two 40-inch-plus fish: one when it wrapped the fluorocarbon sections of my leader around a submerged branch and broke off; the other when Riley learned how not to properly cradle a big pike. That’s fishing!