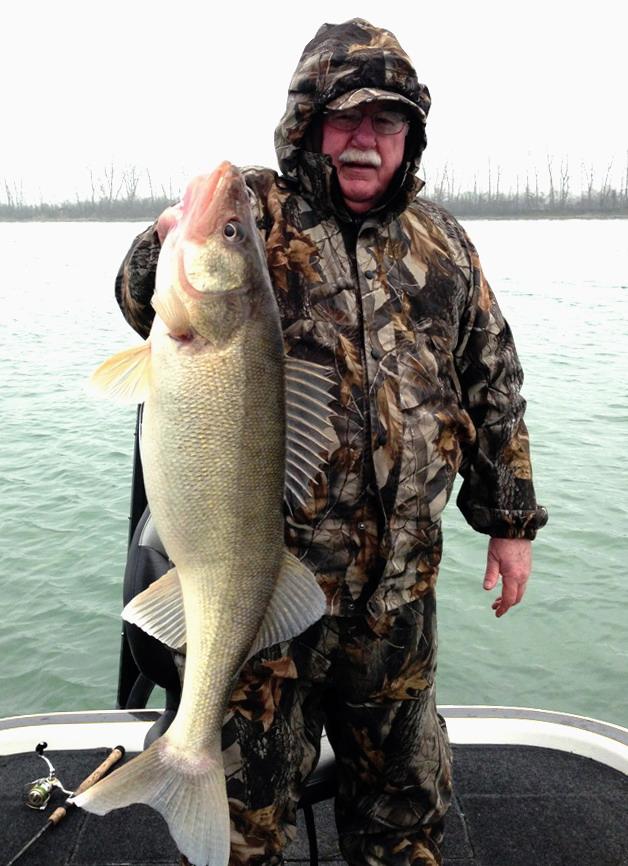 The fastest route in the spring, to a trophy walleye like this one, is a bulked up jig.
BlogsOn the Water Online

Time to “bulk up” for walleyes

Depending where you happen to live in Canada, the walleye season is either now open, about to get underway this weekend or will be the one following. And here is a simple trick you can almost count on to put more and bigger fish into the boat. It is called “bulking up”.

No, I am not suggesting that if you wear a thick sweater or don a hefty jacket that you’ll catch more fish.  But, you will if you bulk up your bait.

Indeed, when it comes to walleyes, Windsor, Ontario buddy and guide Jon Bondyis a lucky man.  As well as living in the “banana belt,” where spring arrives much earlier than elsewhere across the country, the Detroit River where Jon spends much of his time afloat, is open for walleye fishing year round.  So, for the last month, Jon and his clients have been smacking huge numbers of walleyes as well as some giant fish.

To tell the truth, he has been driving me crazy, sending along his annoying daily images of the big fish his clients have been catching while I have to be content, counting down the hours to Opening Day.

And nearly every one of those brutes has fallen victim to a “bulked up” jig, which includes either two scented soft-plastic baits on his jigs or a livebait/salted shiner added to the softbait enhanced leadhead. It is a deadly trick.

Indeed, the way I normally do it is by starting with a 1/16- to 1/2-ounce ReelBait Flasher jig, the one with the tiny spinner that throws off extra fish-attracting flash and vibration, selecting the specific weight based on the depth of the water I am fishing.

Then, I’ll thread on a scented, soft plastic 3- to 5-inch Trigger X Minnow, Gulp! Minnow, or Berkley Power Minnow, so the hook exits the back of the bait in the normal manner.

Now, here is where it gets interesting. Instead of fishing the jig dressed in this manner, I’ll add a second soft-plastic minnow to the hook by running the point under the jaw and out the nose as though it were a live minnow.  Indeed, many times I will use a live shiner, chub or dace to finish off the bulked up jig.  (Some skilled walleye hounds I know, even prefer nose-hooking small scented soft plastic crawlers and lizards.)

Regardless of what you use to top off the dressing, when you “bulk up” or “double up” your jig this way, you’re offering the walleyes a much bigger and more attractive meal without adding too much extra weight.

The combination also has considerably more tail wag and action, and twice the bouquet if you’re using scented baits and/or live or salted minnows.

In addition, because a bulked up jig weighs more, you can cast it much further, especially if you use one of the new ultra-thin diameter super lines like Fireline, Nanofil or Sufix Fuse.

But get this: While a bulked up jig weighs more, allowing you to cast it further, it actually sinks more slowly due to the water resistance the deadly duo provides. So you can routinely fish a bulked up bait in much shallower water than you would first imagine.

Finally, while bulking up a jig works well for walleyes all year round, for some strange reason, it tends to shine in the cold water shoulder seasons of early spring and late fall.

In other words, right now!