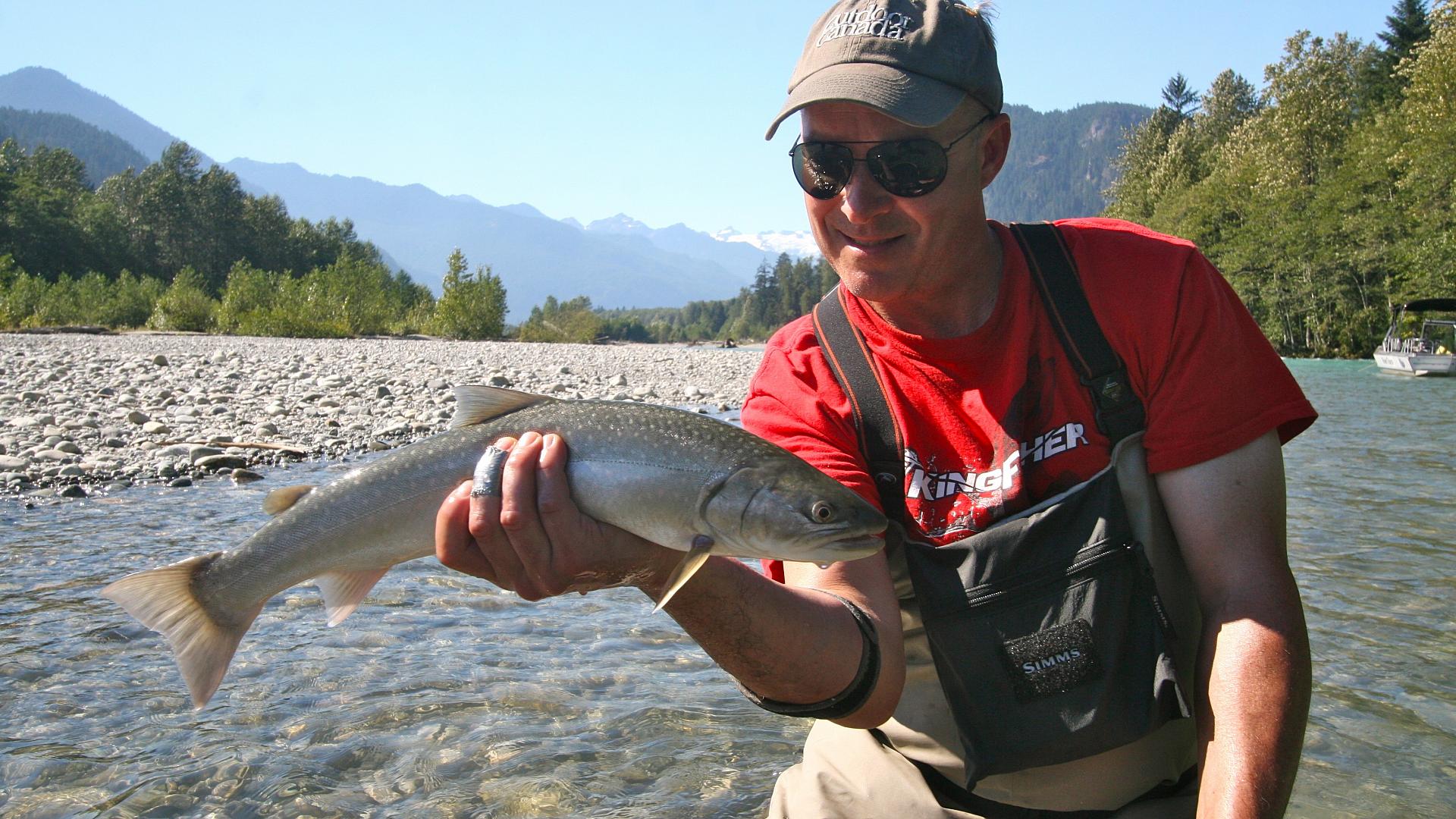 Why you need to try bull trout fishing on B.C.’s Upper Pitt River

At first I didn’t register what was going on. I had been so deep in sleep, exhausted from a long day of swinging wet flies, that the yell only partially jarred me from my foggy dream state.

If that weren’t enough to completely wake me up, Ted Cawkwell finished the job as he racked a couple of rounds into a Remington Marine 12-gauge, the sharp clacking just inches from my right ear.

I sat bolt upright in my camping cot and glanced at my watch. It was almost 3 a.m.

“Bear? Really?” I groggily asked no one in particular. Tony had warned me there were bold black bears in the area, hence the shotgun, but I didn’t expect one to approach our giant camping teepee. For one, it stank like man. Make that men, four of us, actually. There was me, my long-time fishing buddy Ted, outfitter Tony from the B.C. Sportfishing Group and Yves Bisson, Tony’s operations manager.

Plus, our teepee was set up on a mid-stream gravel bar, with the swift current of the Upper Pitt River serving as a kind of natural moat. And really, what self-respecting bruin would even bother with such a scenario? But there we were, clamouring about in the wee-hour gloom, girding ourselves for imminent attack.

Then Yves opened the entrance flap of the teepee, walked out in the darkness without saying a word, and commenced relieving himself into the Pitt.

It turned out the “bear” had actually been a half-asleep Yves, making a curious scuffling sound on the rock-strewn ground inside the teepee as he fumbled to put on his boots. Blame the call of nature. At least I knew then that Tony, the leader of our three-day exploratory fishing mission, was unlikely to sleep through an actual nocturnal visit from a bear.

With the red alert rescinded, Tony, Ted and I took advantage of the fact we were totally awake and joined Yves to do likewise at the river’s edge. And once we’d finished ribbing Tony “Bear!” Nootebos, and the rush of adrenaline had subsided, it was time to get back to sleep. Another round of fly fishing for bull trout lay ahead.

After the others had filed back into the teepee, I lingered by the river’s edge and gazed up at the firmament, the Milky Way appearing as a grainy cloud in the ink-black night sky. I’d seen this sky before, in such far-flung wilderness locales as northern Quebec’s Broadback River, where the only threat of light pollution was a night-time campfire. It was hard to believe that, as the bald eagle flies, we were just 60 kilometres northeast of downtown Vancouver—separated, mind you, by the rugged terrain of the Garibaldi Ranges and North Shore Mountains.

And it wasn’t as though we could just hop in a cab and soon be whooping it up on Granville Street, let alone drive there ourselves. For starters, there was no cell signal to even call a cab. Nor were there roads. To get to Tony’s truck from our campsite, we’d need to board his 23-foot Wooldridge, boat 10 kilometres down the meandering Upper Pitt to the rivermouth, then another 25 kilometres down the length of Pitt Lake to the launch. From there, it was yet another 60 kilometres by road to downtown Van.

Sure, there was no float plane involved on this particular trip. And we were nowhere near north of 60, or hundreds of kilometres from the nearest human settlement. But in that moment as I stared up at the stars, I felt we very well could have been in the middle of nowhere.

When I was a kid growing up on the outskirts of Bracebridge, Ontario, my favourite playground was the Shield-country forest across the road from our house, out behind the ruins of a long-abandoned farmstead. It was a place of tree forts and winter tobogganing, and encounters with wildlife—I once crossed paths with an eastern wolf on one of my countless hikes, neither of us stopping to see what would happen next. As I got a bit older, I’d sometimes take along my Grandpa’s ancient single-shot .410, hoping to bring home the odd ground-sluiced grouse for the table.

While our home was only 200 kilometres or so north of Toronto (it seemed a lot farther back then, before the highways were widened), I remember feeling as though we lived cheek by jowl with the wilderness, with my boyhood free time filled with adventure. All of which is to say, when it comes to defining wilderness, it all boils down to what you know.

Such was my thought process last summer when Tony invited me and Ted to join him and Yves on a two-night, three-day pilot fishing trip on the Upper Pitt. The target species was to be sea-run bull trout, with Ted and me as the guinea pig angler guests.

I was immediately interested, as I’d long known about the river and its various runs of salmon and trout, owing largely to photos of happy anglers and spectacular scenery at Pitt River Lodge. Nestled streamside not far from where we would pitch our teepee, the classy post-and-beam lodge seemed to epitomize the very idea of wilderness retreat—the cushy digs and proximity to Vancouver notwithstanding. It was a place I’d always hoped to one day visit.

As much as I enjoy staying at a fine lodge and eating sumptuous multi-course meals, however, I’m even more content to camp out and cook my supper on a propane stove or open fire. I was also intrigued by the idea of helping Tony and Yves sort out the logistics of a three-day trip, so I readily signed on for the late-July expedition, as did Ted.

Not that Tony’s guiding service didn’t already run day excursions to the Upper Pitt, as well as to the Lower Pitt between Pitt Lake and the river’s confluence with the mighty Fraser. But before offering summertime overnights on the river’s more isolated upper stretch, he understandably wanted to first work out any kinks.

We indeed learned a few things along the way, perhaps most importantly that anything requiring guy lines and stakes—say, a giant four-man teepee—is not the best thing to bring along if you plan to camp out on one of the Upper Pitt’s impenetrable gravel bars. We ultimately got our teepee standing reasonably erect, with the guy lines wrapped around a rag-tag assortment of obliging boulders and driftwood. It wasn’t pretty, but it worked. That said, getting the job done certainly ate into the fishing time.

For me, any outdoor undertaking is made all the better when I experience something new. Well, not only was the Pitt itself entirely novel to me, so, too, was the idea of fly casting Electric Leeches, Intruders and minnow patterns for bull trout—a species I’d never caught before. And to have such seasoned fly-fishing experts as Tony and Yves at my side, offering real-time advice to improve my technique, was pure bonus.

There’s something to be said for the old saw “getting there is half the fun,” especially when getting there is fun. Okay, maybe our boat journey didn’t exactly soak up a full 50 per cent of the trip’s entire fun quotient, but it sure added to the adventure.

From the boat launch at Pitt-Addington Marsh, it felt as though we were entering some great Tolkienesque fjord as we motored up Pitt Lake. Mountains towered on either side of us, with the view becoming all the more dramatic as we rounded Cozen Point and the lake necked down considerably.

With the shoreline closing in, we could see gnarled arbutus trees clinging to the mountain walls, a curious anomaly in that Canada’s only native broadleaf evergreen typically grows on rocky bluffs overlooking the Pacific. Then again, Pitt Lake itself is a bit of an odd duck. Heralded as North America’s largest tidal lake, its freshwaters are heaved to and fro by the pressure of the tidal surge pushing up the Fraser and Lower Pitt from the Strait of Georgia.

This was all very interesting, and it certainly lent credence to my observation that Pitt Lake resembled a fjord. But the real fun began once we reached the top of the lake and entered the mouth of the Upper Pitt.

Have you ever been blasting down an unfamiliar lake in a boat when the deep, dark water suddenly turned the lighter, tell-tale hue of rocky shallows? It’s not a great feeling as you reef back on the throttle and wince, awaiting impact and the demise of your prop, or worse, lower unit. Well that’s exactly how I felt as we rounded the first bend in the river and were suddenly flying over what appeared to be less than a foot of water.

I white-knuckled the boat’s holy-crap handles and then…nothing. The 200-horse Yamaha outboard jet motor continued purring along, pushing us farther and farther up the Pitt. For the next few bends, I still found it unnerving—yet strangely exciting—whenever we hit a particularly shallow patch. But by the time we reached our desired campsite some 10 kilometres on, I’d finally gotten used to the sensation of traversing such skinny water in a speeding aluminum motorboat.

In all, we fished the remainder of that first day and into evening, the entire next day, and the morning of our third and final day before heading back out. Along with exhausting every inch of wadable water around our gravel-bar base camp, we also explored the river for another four kilometres upstream, well past Pitt River Lodge, until Tony’s jet boat could go no farther without running aground.

As it turned out, the bull trout fishing was a tad slow. Tony figured the fish had already moved up to the water we couldn’t reach, closer to the Pitt’s glacial headwaters in Garibaldi Provincial Park. “I’ve never seen it this low at this time of year,” he said at the time, blaming that winter’s smaller than normal snowpack.

But we did catch fish, and sea-run bull trout at that, albeit on the small side. And although bulls were our intended quarry, Ted recorded the biggest catch of the trip with a beautiful, chrome-fresh sockeye salmon. It should be noted here, too, that aside from catching fish, yours truly also lost fish—some real tanks judging by the brief arcs in my rod and the vicious takes. But what’s a few lost fish when the real prize is getting to spend time in the wilderness?

Even when it’s just 60 kilometres from downtown Vancouver.

Learn more about the BCSFG at www.bcsportfishinggroup.com. For additional sportfishing contacts throughout B.C., visit Tourism B.C.’s website at www.hellobc.com.

Along with guided fishing trips to the Upper Pitt River, the B.C. Sportfishing Group (BCSFG) offers a wide-range of salmon, steelhead, trout and white sturgeon charters throughout the Fraser Valley. With its headquarters in the Harrison Hot Springs Resort and Spa on the south shore of Harrison Lake, BCSFG is the parent company of Harrison Bay Guided Services, Fred’s Fishing Adventures, B.C. Fly Fisher Guiding Company and Kodiak Fishing Adventures. Himself a 20-year veteran of guiding in the region, owner Tony Nootebos oversees an impressive crew of more than 20 licensed fishing guides.