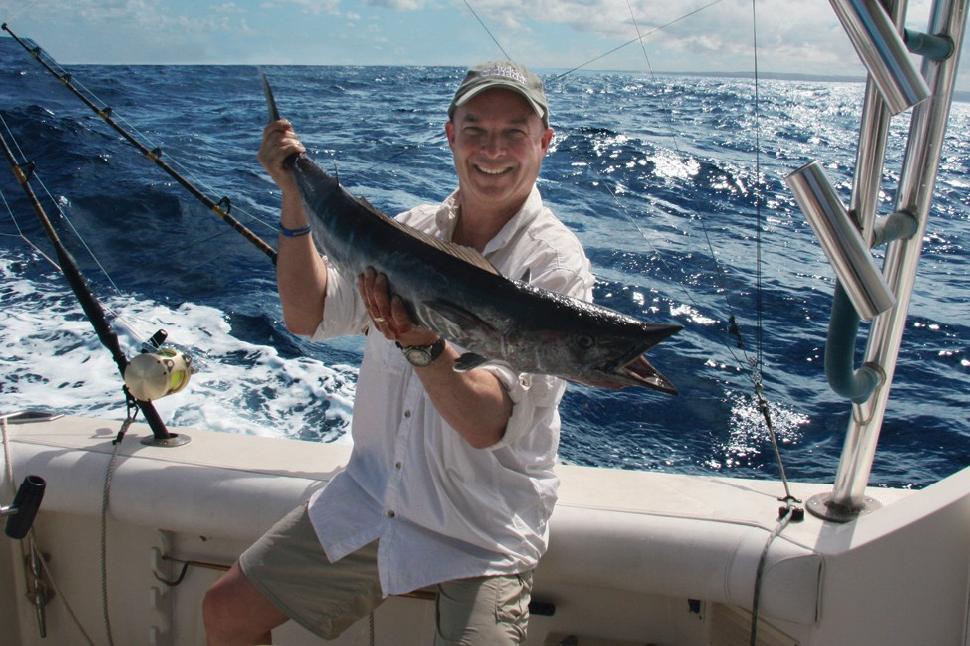 Jimmy Jack’s eyes seemed far larger than usual behind the thick lenses of his prescription sunglasses. I remember thinking he looked like Bubbles from the Trailer Park Boys, only much older. And terrified. That’s when he lunged across the deck and grabbed my belt buckle.

Our big Cabo 35 Express fishing machine had just bumped a swell and I dibbed instead of dobbed, a common landlubber blunder whence a-sea, and performed a backwards pinwheel into the port gunnel just ahead of the stern. I was sea bound, as it were, if not for Jimmy’s mighty Scottish paw.

So nearly ended my first-ever Caribbean deep-sea fishing adventure, along with any hope of Jimmy’s 371/2-foot Brave Heart finishing in the money in the Barbados International Game Fishing Tournament. Not that Jimmy needed me, a complete saltwater neophyte, aboard as the sole crew member accompanying him and the captain, Griffith David. No, they just would have lost valuable fishing time trying to find me and pluck me back out of the deep blue.

Aside from me not dying, at least my missed appointment with Davy Jones’ locker provided the first lesson for my do-it-yourself beginner’s guide to deep-sea tournament fishing.

Here’s what I learned from spending 20 hours over two days on Brave Heart.

If you’re a West Coast or Maritimes angler, go tie a fly or something while I dispense with the following insightful advice. As for you inland folks, I’ll just say this: Often times, the difference between heading home with fresh fillets and filling your lungs with seawater can be something as simple as a fist on your belt buckle.

In short, the sea is not to be trifled with. It’s big, it’s deep, it’s cold and it has waves within waves. Heck, it even has swells within horizon-eating swells. Then there’s that matter of not being able to see land, swell or no swell. Often, the 430-square-kilometre island nation that is Barbados appeared as nothing more than a mere speck in the hazy distance.

Which brings us to how I managed to snag a crew position on Jimmy’s Cabo in the first place. My plan while in Barbados was to hop aboard a charter and check out the local fishing opportunities. Silly me.

The Barbados Game Fishing Association was celebrating its 50th anniversary the week I was on the island, complete with the running of its annual International Tournament.

As such, practically every charter boat on the island was tied up. This I learned through the association’s president, Frank Armstrong, whom I pestered for several days leading up to the tournament until he finally found me a berth on Brave Heart. Turns out Jimmy and Griffith had come down from their home base in St. Lucia to compete in the tournament, but were shy of crew.

The takeaway here? Hang out at the tournament’s host port, in this case the swanky Port St. Charles facility, and let it be known you’re looking to crew. It’s also a good time to chat up the locals about the fishing.

You may never compete in something as Caribbean cool as a deep-sea fishing tournament again, so drink it all in and learn a thing or two. Hey, you might even return one day and actually hire a charter, and you’ll be that much further ahead on the tropical learning curve.

One thing that blew my mind to learn about deep-sea fishing for pelagic predators such as marlin and sailfish was this: you run your baits on the surface. On the surface. In 3,000 feet of water. And you fish them over edge structure that’s thousands of feet down. In our case, we dragged an array of six skirted Pakula and Iand lures (think hoochies on sterioids) skewered with pointy-nosed ballyhoo baitfish. We also ran a teaser, a plug-like affair that churned up a great stream of froth, straight back off the stern. It all reminded me of trolling in the prop wash for muskies on Ontario’s Lake St. Clair-but with twin 435-horse Caterpillar diesel V8s pushing you along at 7.3 knots.

Here’s something else I found surprising: once you round Barbados’ North Point, as we did some 29 nautical miles offshore, you’re no longer in the relatively placid Caribbean Sea, but the much angrier North Atlantic. Point your bow north and you’ll eventually find Nova Scotia.

Dumb tip, I know. If you’re an angler, how could you not get excited to be competing in a deep-sea fishing tournament? The truth is, I wasn’t. At first.

Trolling just isn’t my thing-I typically find it too boring. Sure, I’ll do it if it’s the only way to put fish in the boat, but I’d much rather cast and retrieve, or jig. On this particular trip, I really wanted to fling flies for bonefish in the surf (Barbados doesn’t have flats fishing, as do other Caribbean destinations, such as the Bahamas), but the bone bite just wasn’t on while I was there. Alternatively, I wanted to see what kind of inshore fishing was available, but there was that matter of the International Tournament chewing up all the charter time. So, my hand was forced. And a good thing it was, too, or I would have never felt that amazing rush when a blue marlin tagged the port outrigger bait and tail-danced across the breadth of Brave Heart‘s wake. We ultimately lost that fish-eyeballed by Griffith at roughly 200 pounds-but it didn’t matter.

I was a convert. Troll on.

Sure, fishing in an international tournament is already adventurous, but as with any fishing trip, I like to take things up a notch wherever possible. If you’re plying the seas in something serious like a Cabo, for sure climb up to the tower helm. It doesn’t look that high-until you’re midway up the chrome ladder, with the boat lurching in the giant swells. And once you’re up there, the view is worth all the white knuckles in the world.

The same goes for dry land: don’t stay rooted to your all-inclusive resort. Instead,
hit the local hot spots. In Barbados, for fish lovers like me, the place to go is Oistins,
a fishing village featuring a string of rustic seafood eateries and drinking establishments.

Try everything that’s put in front of you. For example, I can now add mahi mahi, wahoo and flying fish to the list of exotic things I have eaten (moray eel is still at the top of the list, though). I even weighed into the local debate over which beer is better: Banks from Barbados or Piton from nearby St. Lucia. Banks all the way-if you’re not drinking the island’s renowned Mount Gay Rum, that is (in which case, make sure it’s the Extra Old dark stuff, “the rum that invented rum”).

Remember my near man-overboard trick? That’s one reason to pay attention. But you’ll also miss some really cool stuff if you keep your head down. Early on in the second day of the competition, for example, I watched a pod of 10 or so tan-coloured porpoises dive in and out of the starboard bow wake for about 20 minutes. You just don’t see that kind of stuff on Lake Ontario.

I also learned to keep my eyes peeled for bits of debris floating on the water. At one point, we spied a wooden box lid, and Griffith turned the boat and made a beeline for it. The reason? Such flotsam creates an ocean ecosystem in microcosm, whereby flying fish plant eggs on the debris, which attracts small baitfish that in turn lure in hungry wahoo and mahi mahi that then attract the coveted big boys: the billfish. Jimmy called the phenomenon the circle of life. Garbage as structure. Who knew?

One fish is all it takes-no matter when it bites-to make you instantly forget all the fishless hours that preceded it. For me, that one fish, my only fish of the tournament, came at 9:30 A.M. on day two, just as we trolled past the wooden box lid (see #6) and Jimmy and I scored a wahoo doubleheader, our fish weighing in at 10 pounds apiece. Did I appreciate the catch? Turn back a page and look at the photograph. See my big smile? I think that says it all.

Interested in fishing in Barbados? January through to April is the hot bite for blue and white marlin, sailfish, great barracuda, wahoo and mahi mahi. Opportunities for yellowfin tuna, while not as abundant, also peak at this time. For local tournament information, check with the Barbados Game Fishing Association.

For charter contacts and all other visitor info, including accommodations, get in touch with the Barbados Tourism Authority, which I found quite helpful. During my visit, I stayed at the all-inclusive Almond Beach Village and the Sea Breeze Beach Hotel.