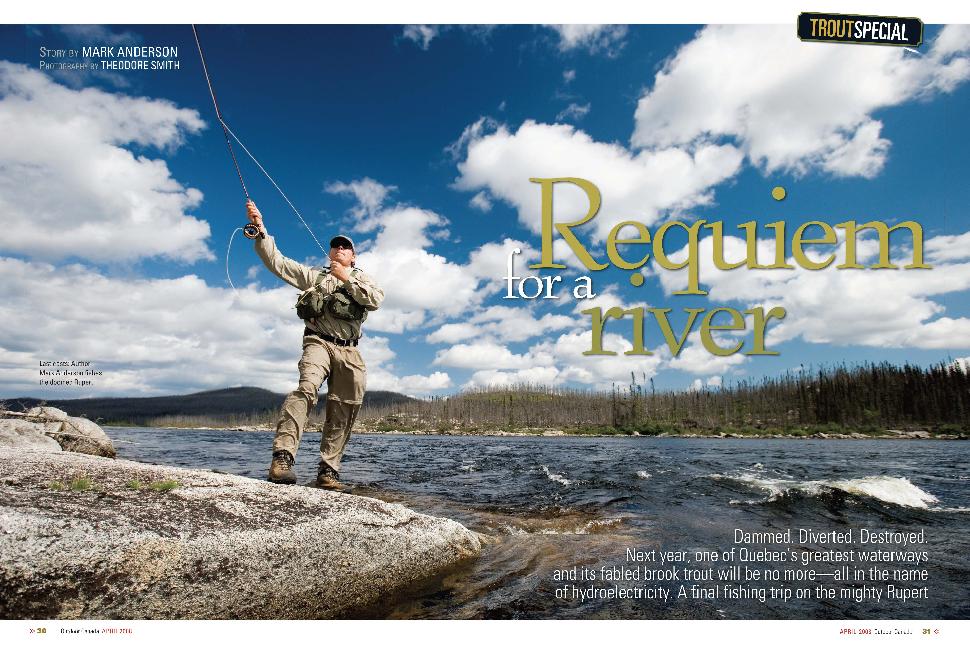 Requiem for a River
BlogsField Findings

A Fond Farewell to One of Outdoor Canada's Favourite Scribes

I first met Mark Anderson 11 years ago when he ambushed me in my office, phoning me from the parking lot and telling me he was coming up to meet me. And in short order, there was this guy, sitting in my office telling me why I should let him write for our magazine, the first and foremost reason being he was an avid angler. Or so he said.

Yeah right, I’d heard that plenty before. Likes to write. Likes to fish.

But, I had to admire his moxy. Plus, at that time Mark had already long established himself as a business writer, filing pieces for the likes of National Post Business and the Financial Post Magazine.

So we took a chance and started assigning him articles. As it turned out, of course, it really wasn’t much of a chance.

Mark really was an avid angler. A fly fisherman, actually, and a very good one. His first big piece was about competing in Canada’s inaugural National Fly Fishing Championship, held in 2003 in Manitoba. Mark’s team won Gold, while Mark himself earned the bronze for individual effort. The resulting feature was at once self-deprecating, highly informative, engaging and very funny.

It was also an easy edit. Or as I told thestoryboard.ca for their online tribute to Mark, “edit” is too strong of a word. A “light dusting” was all his stories ever needed. He was an editor’s dream: he didn’t make us work hard.

With that, Mark became our go-to guy for out-there assignments. We knew we could throw him into any situation and he would come up with a great piece.

He competed in a reality TV fishing competition.

He trained with the Canadian Rangers in the far North.

He fished the Rupert River in the Hudson Bay basin, just before it was dammed for hydro electricity.

And we sent him to Florida to profile a controversial fishing TV host, disgraced in the Canadian fishing community over a series of fishing regulation violations—he also happened to be a retired Hamilton Tiger Cats linebacker with a reputation as a tough guy. Mark charmed him, and got a fantastic story.

But the list of topics doesn’t end there. Far from it. Among Mark’s many pieces for Outdoor Canada, he also wrote about:

Even when he was ill, Mark continued to grace our pages, with articles this year about inflatable PFDs and the effects of 2013’s massive Alberta flood on the famed Bow River’s trout fishery.

In all, his work for OC garnered 10 NMA HMs in the how-to, service, sports and recreation, arts and entertainment and editorial package categories, along with one silver in the travel category (for that piece on the Rupert River). And we’ll certainly be entering his Bow River feature in next year’s awards.

And as good as Mark was with long-form journalism, he was also highly adept at writing the short stuff—again, he was truly an editor’s dream.

This past summer, we were hoping Mark would complete two more assignments for us. One was to send him to the Azores, a Portugal-owned archipelago out in the middle of the Altantic, where he would compete in a big-game fishing tournament. He was all set to go when his health demanded a fresh round of treatments at the same time as the tournament.

The second assignment, conceived by Mark himself, was to be a travelogue about fishing a wild river in northern Quebec, but in the process of writing the piece, it began to evolve into more of a comtemplation of his health and his connection to fishing. You see, at age 51, Mark was in the final stages of terminable throat cancer.

Here’s a bit of what he wrote.

“Where would you go if you had one last, great fishing trip in you? In the summer of 2014, after various failed treatments, my quick-marching, stage-four cancer was diagnosed as incurable and unstoppable. Not to suggest I was going to keel over on the spot: I could yet live for years, according to one of my oncologists. “Not five or 10 or anything like that,” he noted. “But maybe one. Or possibly two.”

He demurred. “Wouldn’t that be nice.”

Sure. Why not. But I had to admit I wasn’t well. A walnut-sized tumour at the base of my throat was gradually closing off my windpipe and sapping my energy. I coughed a lot, bent at the waist and sounding like a corgi choking on a chicken bone. I felt all rung out.

So, where would you go if you had one last, great fishing trip in you?

Well, if you were me you’d be fly fishing, which means chasing trout: big, wild ones, preferably sea-run. And if you could catch, say, 20 of them in a day, and they exploded on dry flies like they hadn’t seen a meal in a month, that’d be good too. I gave it some thought, but I really didn’t have to. Donald Thom, my fly fishing teammate of the last dozen years sorted it out for me: the Legreve River, 1,500 kilometres north of Montreal on the frigid shores of Ungava Bay….”

It’s because of literary gems such as this that Mark will leave such a big hole in our editorial line-up, and all I can say is that we are so thankful we had him on our team when we did.

Sadly, Mark did not complete that piece before we lost him on October 16, but we will work faithfully with his wife and soul mate, Cathe Lindquist, along with his great fishing buddy, Donald Thom, to put the story of his final fishing adventure into print, where his words will live on.

Mark has left an enormous hole in our editorial line-up, and all I can say is that we are so thankful we had him on our team when we did. May he enjoy endless tight lines in the great beyond.