It is early in the morning as I write this, and the sweat is already running down my back, soaking my T-shirt and dripping off the end of my nose. And get this, the forecast for Kenora this afternoon is predicting a Humidex reading of 104°F. It’s the same thing, or worse, across much of the country.

So, we’re well into the dog days of summer, right? When the fishing gets brutally tough, right? Well, no, that isn’t right.

Fact of the matter is, there’s nothing the bass, walleye, northern pike, muskellunge, yellow perch and black crappies enjoy more than the stifling heat and humidity that’s blanketing the country.

Oh, for sure, the conditions make fishing a challenge for the angler, who needs to wear light, sun-smart clothing, slather on the sunscreen, don a wide brimmed hat and stay well hydrated. But the weather is nothing but a bundle of joy for the fish.

Think about it: largemouth bass and smallmouth bass are members of the sunfish family and relish bathtub temperatures. They shivered away the winter, lying on the bottom of the lake, for many of the past months, surviving like bears in a state of torpor. In fact, a significant percentage of the population perished under the ice, especially those individuals that failed to build up sufficient energy reserves last fall.

It’s the same thing with the walleyes, muskies and most of the other warm- and cool-water species. Life simply couldn’t be better than it is right now.

If this is the case, however, why do so many of us think that the fishing is the pits, and refer to the period as the summer doldrums? Ironically, it’s because the fish have moved to the summer cottage and most of us, quite simply, have failed to come along for the ride.

Another important reason is that the fish have so many different choices of where to eat and what to dine on, that it can be a chore for some anglers to sort through the various options. Think about the angler who says, “But I caught them here a month or two ago using a #5 Mepps spinner.”

Hello, that was in the spring—it’s summer now! 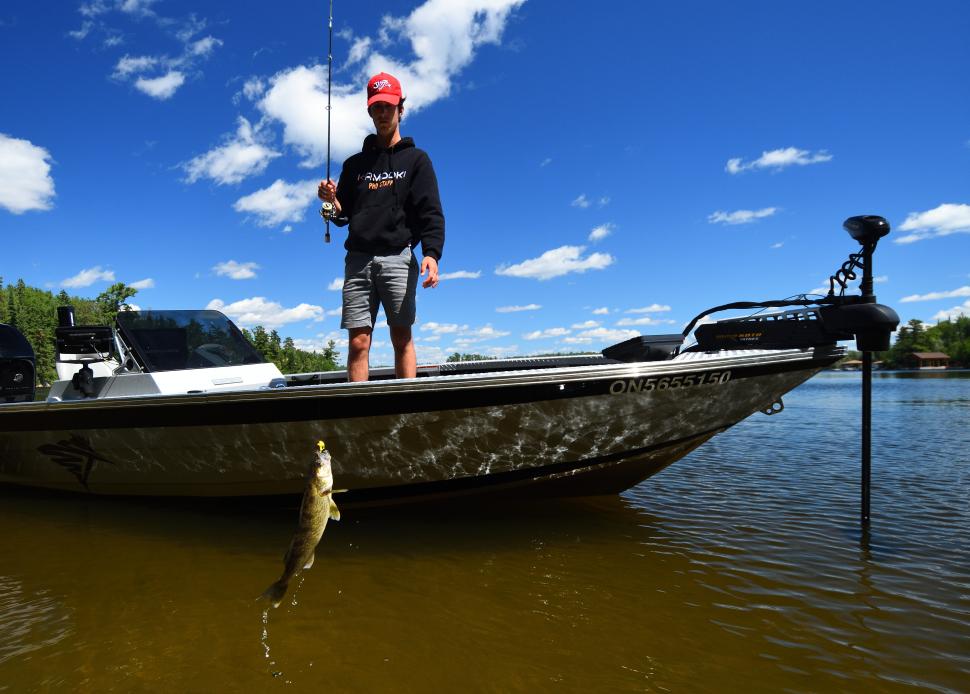 Let’s take walleyes as the perfect case in point, because they are eating as much as five percent of their body weight every single day. My grandson Liam and I were out the other day fishing for smallmouth, and just before noon we decided to enjoy a walleye shorelunch. I know, it’s a tough job but someone has to do it.

Anyway, Liam dropped me off on shore and I started to collect some driftwood for the fire and fashion a crude rock circle on which to lay the frying pan. But before I could strike the match to get the fish feast underway, he was flipping walleyes into the boat left, right and centre. They were gorging so intensively on the mayflies that were hatching in the shallow warm water that he wasn’t even using live bait. Instead, he was skewering small soft plastic minnow imitations onto his ReelBait Flasher jig.

That same afternoon, however, a buddy who loves pulling crankbaits for suspended walleyes out on the main lake was catching much bigger fish as fast—or faster—than Liam.  And my young friend, Hudson Kyte (below), who lives almost 2,000 kilometres away in southern Ontario sent me an email image of a beautiful walleye, and his personal best, which he had just caught casting tube jigs.

Understand what I am saying: Liam was sitting over top of a school of mayfly-gorging walleyes in 6 or 7 feet of water, catching them on a jig. Buddy was catching them 20-feet under the surface, trolling a slender Rapala Tail Dancer over much deeper structures.  And Hudson was fishing somewhere in between those depths using a bass-style tube jig.

I am just as certain, as well, that other walleye anglers were catching fish in vastly different ways, including slip bobber rigs, Jigging Raps and swimbaits, and in a variety of water depths.

It points to the fact that in the summer, when the fish have so many different options at their disposal, that you need to be more mobile than almost any other time of the year. It’s also the reason why so many of us keep half a dozen or more rods rigged with different lure choices and bait options. If you try to force feed them with one presentation, they may not like what you’re offering.

Indeed, our philosophy has always been to: “Fish ’em fast, fish ’em slow! Fish ’em high, fish ’em low.” But it is especially true in the dog days of summer, if you want to debunk the doldrums myth.

Now, I have to go change my T-shirt and get a cold drink of water.