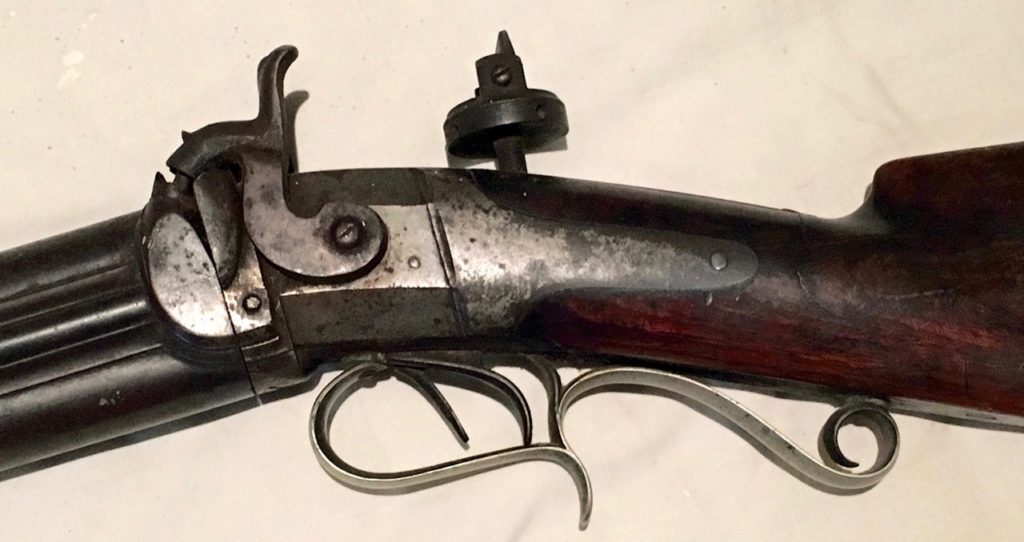 I always read your magazine, and I really enjoy the articles on older firearms. I recently read your answer about a .22 calibre Deutsche Werke rifle. I also own one, but I never knew much about it. My father handed mine down to me, and I actually learned how to hunt with it. Thank you for the article.

I also own an over/under muzzleloader that was originally my grandfather’s (above). It is a rifle on the top and a shotgun on the bottom. My best guess would be that it’s a 45-calibre rifle and a 12-gauge shotgun, based on the looks. According to my father, the last time the gun was fired was just before my grandfather registered it at the start of the Second World War. Both my grandfather and father have passed, so I have no further information, but I would like to learn more about it. 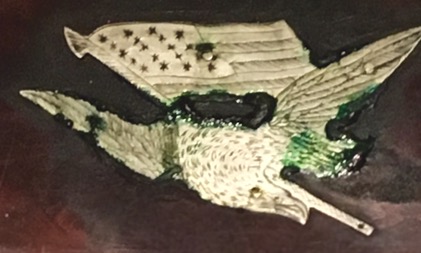 There is no date stamped anywhere on the gun, but it does say it was manufactured by H. Stevens in Watertown, N.Y. The only other real clue is that there are only 19 stars on the inset of an American flag (above). I don’t know if this is of any significance. I also have the ball starter, copper-crafted powder dispenser and leather shot dispenser.

Henry Stevens was born in Vermont in March 1816. The 1840 Watertown, N.Y., directory shows he was employed as a gunsmith, working for an A.R. Skinner. By 1855, Stevens was advertising his own gunmaking business. He seemed to specialize in blackpowder, heavy-barrel target rifles, as well as rifle/shotgun combos such as yours. He was considered a competent, capable gunmaker who turned out high-quality work. Incidentally, I can find no indication of any connection to J. Stevens, the well-known gunmaker from Chicopee Falls, Massachusetts.

The U.S. flag inlay shows your rifle was most likely made in the early 1860s. The 19-star flag became popular with the strongest opponents of slavery around 1861, at the outbreak of the American Civil War. They wanted a flag recognizing only those states and original colonies that had never permitted slavery, hence the 19 stars representing the states and eight stripes representing eight of the 13 colonies. This was never an official flag, but it was popular with people like Henry Stevens who wanted to publicly demonstrate their staunch opposition to slavery.

Stevens would have been in his mid- to late 40s at the time of the Civil War, and likely considered too old to serve in the military. He may not have been in the best of health, either, as he died on June 3, 1869, at the age of 53.

There isn’t much I can tell about this firearm that you don’t already know. The photos show excellent workmanship, and it appears to have been cared for very well. It certainly has collector appeal, and the original accessories add to the value. I wish I could give you an estimate of what it’s worth, but I can’t find any comparable sales. If you decide to sell it, go through a well-publicized gun auction.